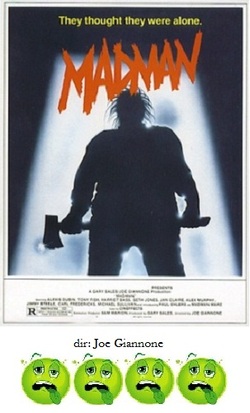 There was no more blatant attempt to cash in on Friday the 13th than this thrill-less carbon copy (1981's The Burning was also guilty of this, but that film was actually good).

Taking place at a summer camp for gifted children, the local boogeyman is Madman Marz, a hideous psychopathic farmer who killed his wife and kids nearby.  It is said that citizens of the nearby town lynched Marz for his crimes, but the next day, his body vanished.  So, yeah, Marz is still alive and he trains his trusty axe on the camp.  Why?  Because one of the young campers yells his name.  Really. As you can tell, Madman barely tries to come up with a motive.  Writer/Director Joe Giannone (Madman is his only credit) gives us this barely there clothesline in which to hang the usual slasher movie cliches and killings.

How threadbare is Madman?  There are barely any campers at this particular camp.  Only a small handful of kids appear on the screen late in the film to give the appearance this is actually a functioning camp.  There are just about as many counselors as campers; therefore, the ability of this camp to actually stay afloat with that business model is quite the mystery.

The cast is comprised of actors who probably were just pulled off the street (with the exception of Gaylen Ross- under the pseudonym Alexis Dubin, from Romero's Dawn of the Dead); they are uniformly awful and  the film's biggest detriment.

For the die-hard gore fans, heads do roll aplenty, but the effects and make-up are so drenched in darkness, sometimes it's hard to tell what happened (the decapitation via car hood is interesting nonetheless).  Adding insult to injury is the dreadful theme song which is played at the beginning of the film and over the final credits.  It's priceless.  In all departments, Madman is a tough, slow, slog.