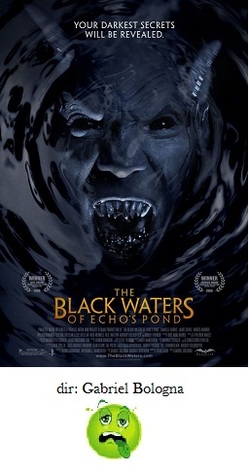 One of the biggest questions I have regarding how the movie studios routinely mishandle the release of horror movies is personified by the fate of the interesting, if imperfect, The Black Waters of Echo's Pond.

In a movie market where unwatchable junk like Shark Night can get a wide 2000 screen release and even the umpteenth, inept sequels to Leprechaun or Wrong Turn clog up DVD shelves nationwide, that some horror movies that at least try for something original get tossed into oblivion.  We all remember the fate of 2007's fabulous Trick'r Treat that circulated film festivals nationwide to acclaim only to be gobbled up by Warner Bros., stuck on a shelf and then unceremoniously dumped onto DVD.  The Black Waters of Echo's Pond also did the circuit, and it had a very limited theatrical release.  Two years later, nobody has picked it up and it still hasn't been released onto DVD.  If you want to see it, you'll just have to stumble on it by accident.   I'm not going to say that The Black Waters of Echo's Pond is some sort of unheralded, brilliant classic, because it isn't.  It has an unclear premise and it doesn't explain itself very well, but it tries to bring some new stuff to the table and it provides a creepy jolt or two.

The movie begins with a flashback where a group of archaelogists find some mysterious stone carvings in a Turkish cave that apparently provide the directions for building some sort of contraption that will spring the wrath of the God Pan, or something.  Anyway, we jump to the present where a group of teens, including indy mainstays Danielle Harris and James Duvall,  have rented a house, owned by Robert Patrick, on an island off the coast of Maine (the same island a terrible massacre occurred that is tied to the archaelogists' find).  The teens then find a very weird board game.  It seems this game is the contraption in question and it's pretty cool looking, and playing it involves cards that cause them to make very personal admonishments to and about each other.  The center of the game is a silver disc representing Echo's Pond and when anyone looks at it, grave secrets are revealed.  The movie spends so much time with the characters playing the game that you have to wonder why the screenplay didn't spend just a little bit more time explaining the rules to the audience.  As it is, it's just a lot of random dice-rolling, token-moving and card-reading.

Where does all of this lead?  Well they all get jealous of one another and then become possessed by some unexplained force that blackens their eyes and causes them to attack and murder each one another in gruesome fashion.  There is some unclarified connection to Pan involved, too.  Occasionally the goat-headed imp appears, but nothing is ever done with him so he is just kind of forgotten about.  The ending is also problematic in that it is so insanely drawn out, as if the screenwriters had no earthly idea how to wrap it all up in a satisfying or convincing fashion.

Sure, there are plenty of better horror movies out there, and maybe in the grand scheme of things expending a whole lot of energy into seeking out and watching The Black Waters of Echo's Pond shouldn't be really high priority for fans.  But when looked at in comparison to the terrible Shark Night, Dream House or Season of the Witch, wide releases all, it should have had a better fate.