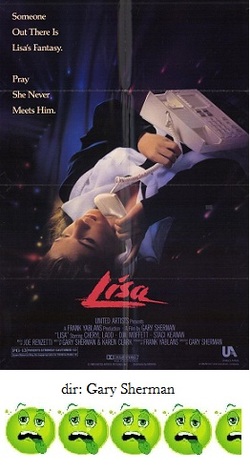 Take the most generic 'Lifetime' movie plot you can think of, add a thoroughly obnoxious 'heroine' and then suck out all of the suspense or tension and the result would look something like Lisa.

Staci Keanan is Lisa, a particularly annoying 14 year-old girl who consistenly butts heads with her single mom, Cheryl Ladd, over her desire to start dating.  Since she isn't allowed to go out with boys, she and her best friend get their kicks taking photographs of strange guys they see on the street and then prank-calling them.  Unbeknownst to Lisa, her newest target just so happens to be the local serial killer known as the 'Candlelight Killer,' played by D.W. Moffett.

This plot idea is all well and good, but it takes forever to get there, and then it becomes obvious that Lisa has nowhere to go, really.  After about the first 10 minutes you can pretty much guess every single thing that's going to happen in this movie.  When I called Lisa a 'Lifetime'-level movie, I wasn't being glib.  Everything about Lisa is just so flat: it looks cheap, it's not directed with any style, any signs of true peril or violence are off screen, and there is nothing in here to distinguish itself as being anything worthy of a theatrical release.

The film's biggest problem is by making the character of Lisa so thoroughly unlikable.  She comes off as such a complete, insufferable brat you wonder why Ladd doesn't just backhand her across the room on a regular basis, because she needs it.  Couple that with how stupid she is by making these phone calls as well as the plot thread involving Lisa trying to hook her mom up with the 'Candlelight Killer,' and all audience sympathy is drained away.  Keanan's performance is okay, I suppose; she at least complains convincingly.  Ladd is your standard 'movie mom' and Moffett is just a blank slate, which may not be entirely his fault since his underwritten character gives him nothing to work with.

Lisa is the very definition of disposable.  Why anyone felt a burning need to make it is the big mystery here.  It's written and directed without energy and performed without conviction.  Audiences, justifiably, felt no need to see it in theatres, and by continuing to avoid it, they'll be doing themselves a huge favor.