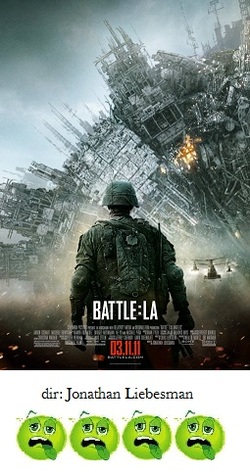 Debuting only 4 months after the very similar alien-invasion flick Skyline, Battle: Los Angeles has better acting, better productions values, and all-around better technical credits.  Why, then, is it so much worse?

So, there's this alien attack that begins on the California coast and the ships and creatures begin incinerating buildings and sunbathers.  Enter the Marines, led by Aaron Eckhart, who begin a systematic battle against the invaders, going from neighborhood to neighborhood in armed combat.

It's here where the big problems with Battle: Los Angeles reveal themselves.  The battle scenes are so incoherently filmed and edited that every scene in the movie is a shaky-cam blur of screaming, gunfire, explosions, and flying dirt and debris.  Seriously, they may as well have thrown handfuls of sand directly at the camera lens and you'd never know the difference.  And since the entirety of Battle: Los Angeles is comprised of these frantic battles (only pausing to introduce a citizen in peril or to mourn the death of a soldier) it's impossible to know what is going on most of the time.

At times, the aliens have the upperhand (I think), and at others. our Earthling Marines do (again, I think).  All I know is that after the interminable 2 hour running time has run its course (which easily feels twice as long), we are victorious and the movie ends.  So what?

As stated before, the special effects and sound design are top notch, so much so that it really deserved some kind of awards recognition in those categories, although the editing most certainly does not.  The cast, including Ne-Yo, Michelle Rodriguez and Michael Pena, do what they can, but all they're given to do is scream, run and shoot; in fact, the screenplay probably has only about 20 minutes worth of actual dialogue.

Critics jumped with both feet on top of Skyline when it opened in November 2010, and although that movie is far from what you would call good, it's several times better than Battle: Los Angeles.  Sure, the dialogue was lame, the acting was subpar and there were serious story flaws, but Skyline, at least, was able to convey a real sense of doom and dread and you could actually clearly see what was happening on the screen.

Battle: Los Angeles proves that the little things do make a big difference.