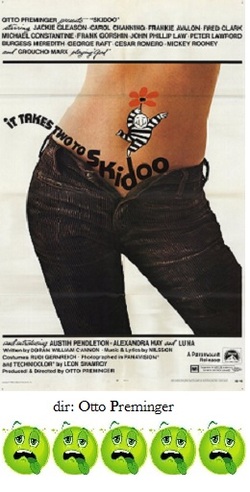 What do you get when an aged fossil of a director, in this case
notoriously despotic Otto Preminger, desperately tries to tap into a current youth culture?  The results could look a lot like the bizarre, and bizarrely awful, Skidoo, a train wreck of outdated slapstick, cartoonish hippie philosophy, dreadful music, blindingly tacky sets and costumes, and some memorable (for all the wrong reasons) LSD trips.

Skidoo’s main plot revolves around ex-mob enforcer Jackie Gleason being ordered by the head of the local crime family, named God (played by Groucho Marx of all people) to set himself up as a prison inmate to execute (or as they call it here,“kiss”) mafia prisoner Mickey Rooney. While all of this is transpiring, Gleason’s wife, Carol Channing, invites all of the hippie friends of her daughter, Alexandra Hay, to stay at their home.  Also on hand are Frankie Avalon as a young mobster, John Phillip Law (he has one of the funniest quotes: “If you can’t dig nothing, you can’t dig anything. You dig?”) as Hay’s main squeeze, Burgess Meredith as the prison warden, and others including Frank Gorshin, Peter Lawford, Slim Pickens, George Raft, and Cesar Romero.

In the prison cell with Gleason is Austin Pendleton who is not only a wiz with electronics, but he also has a box of stationary that is soaked in
LSD.  And it is at this moment in Skidoo when things go from just
groaning awfulness to outright insanity; Gleason accidently doses himself with the acid, proclaims “I’m on a trip!” and begins hallucinating.  It is rumored that Preminger himself experimented with acid to prepare for directing Skidoo, and he either took too much or not nearly enough.  Gleason watches Pendleton shrink to the size of a mouse while enshrouded in a pink cloud, and then sees Groucho Marx’s head atop a giant screw that goes down a sink drain.

Oh, but we’re not nearly finished.  Pendleton and Gleason slip the entire prison population with a dose of the LSD while they prepare to escape by creating a hot-air balloon to fly them out. The endless hallucinations include clichéd flying heads, slow-motion effects, the Green Bay Packers playing football in the nude, and a song and dance number from a dozen garbage cans that sprout heads and legs and sing one of Nilsson’s (the man responsible for all of the music) awful songs (“Garbage Can Ballet”).  Anyway, Gleason escapes to the private yacht of Marx at the same time as Channing, and the entire hippie sailboat armada.  Our heroes defeat God while Channing croons the title track wearing a pirate outfit, complete with such profound lyrics as “Skidoo, skidoo, between the one and three there is a two.”  But the bad music doesn’t even stop there as we are treated to Nilsson singing the entire end credits.  No, really.

Preminger, the man behind such classics as The Man With the Golden Arm, Exodus, and Anatomy of a Murder, was apparently so enthralled by the hippie drug culture, he really just wanted to make a movie that was only about taking LSD. But he wanted it to have it both ways by trying to appeal to the late 60s youth movement while filling the movie with old, bankable stars in order to entice the rest of America.  It didn’t work.  Older viewers were put off by the long hair, drugs and body painting, and younger viewers just laughed at the film’s completely inauthentic portrayal of their generation.

Skidoo, skidoo, wanted to be number one but was more like number two