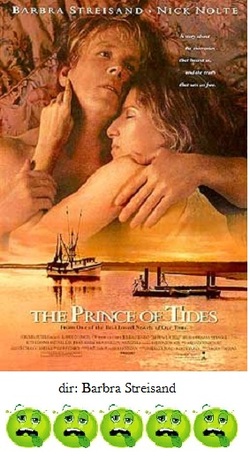 A few of points need to be made initially before delving into this review. Point #1: Pat Conroy's novel The Prince of Tides still stands as one of the best novels I have ever read (stop snickering, unless you've read it, you have no idea how really good it is), Point #2: I am a firm believer that a novel and its film interpretation should be viewed as seperate works, Point #3: I have a serious dislike for Barbra Streisand.

So what's with the diversion? I have to explain myself about how hard it is to give an objective review of the clunker film version of The Prince of Tides. I'll just have to blame Barbra. Although, Pat Conroy deserves a few lashes as well.

The story, by now, should be familiar. Tom Wingo (Nick Nolte) visits his sister Savannah in a mental hospital and becomes the patient of Dr. Susan Lowenstein (Babs). You see, they need to get to the root of Savannah's illness, which more or less has to do with the Wingos's childhood and their demanding, sometimes vicious, mother (Kate Nelligan). Now, when I heard that Streisand was planning to direct the film, I was hopeful. When she stated she was starring in it as well, I was impressed. Streisand's ego is so huge, that it would go without saying that she would be the lead. Which in the case of the novel, is the mother, Lila Wingo. What a risky role for Babs, I thought. How cool. Well, it figures that she would get around that by having the lead be the shrink instead, making sure her self-deluded image as a sexpot would remain intact. Even worse, Pat Conroy allowed his work to be gutted for that reason, still worse than that, he himself did the gutting.

So what's left on the screen is little more than a rather dull disease of the week TV movie. "On NBC Tuesday 'Tom's Secret'". The good doctor doesn't seem to do much doctoring, except for getting Tom into the sack and trying to force him on her spoiled-brat son as some sort of pseudopsychotic father figure.

Will Babs get underneath the truth of Savannah and Tom's childhood hell? Will Tom ever realize how deadly Babs's fingernails are? Will Babs ever shoot a scene that doesn't seem to have some sort of unearthly, golden glow about it? Do you really care?

If only therapy and mental healing were really that easy. As you may know, Babs went on to direct herself as yet another sexbomb in The Mirror Has Two Faces (but that's another review for another time). Astoundingly The Prince of Tides was nominated for Best Picture. Babs, however, was not nominated for Best Actress or Best Director. There is some justice after all.