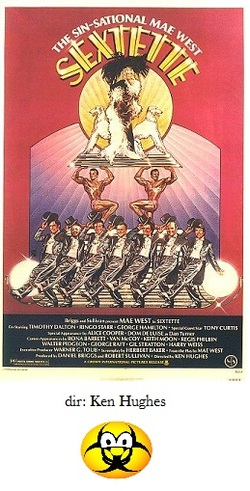 Movies like Sextette can seriously tax the endurance of even the most seasoned bad-movie viewer.  Honestly.  It took all the strength I had to watch each and every one of its wretched, soul-deadening 90 minutes.  It's unclear who thought that Sextette would be of any interest or value to anybody, but there it is and we can only look at the remains.

What we have here is an extremely dated sex-farce starring a decrepit and embalmed-looking Mae West (officially, she was 84 years-old at the time of Sextette's filming, but inside sources say she was more like 91, not that it makes a whole lot of difference).  West stars as internationally beloved screen sex siren Marlo Manners who has just gotten married for the sixth time to Timothy Dalton, an English aristocrat, and who would be about the same age as her great-grandson.  The whole film takes place in the hotel and in their honeymoon suite where interruption after interruption occurs to postpone the consumation of their marriage.  In fact, it seems the whole world is breathlessly awaiting for these newlyweds to get busy, as there are constant crowds and live camera crews everywhere, desperate for the...'blow by blow' if you will.

The interruptions include appearances by Tony Curtis, Ringo Starr and George Hamilton as three of West's ex-husbands, as well as her required screen test for a new movie and a costume fitting, which causes Dalton to complain to Dom DeLuise, West's personal assistant, that "I'm her leading man now and she certainly won't be needing many clothes for the next few days." (shudder)  That image certainly gives one the willies.

West just shuffles along from scene to scene, constantly bobbing up and down and throwing out her famous double-entendres that were already tired some 30 years earlier, "Marlo, do the fans like you married or single?" which is met with "Ooh, they like me any way they can get me."  The effect is something akin to listening to your grandma with Alzheimer's telling a dirty joke at a family reunion. You just don't know how to react.  With horror?  Shame?  Discomfort?  All of the above?  And let's not forget all of the musical numbers.  All of the...very...very...VERY bad musical numbers which range from Alice Cooper, in a brief cameo as a waiter, appearing just to sing a disco tune on the piano, to Dalton and West in a horrific duet warbling "Love Will Keep Us Together", in which West helpfully includes a timed "whatever" just so we know she's still alive, or the scene with West garbling an incomprehensible number while muscle men from the "American Athletic Team" strut and pose around her.  Yes, she's just that damn irresistible.

When the end credits finally rolled, and after West and Dalton sail away in their honeymoon yacht, all I kept thinking was: Forget waterboarding, Sextette is the ultimate torture device.