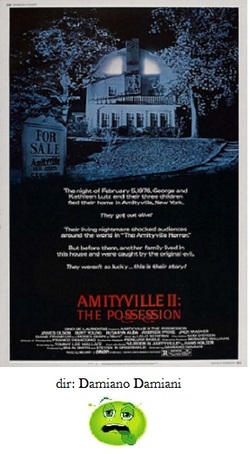 I really hate it when movies that are supposedly based on actual events play fast and loose with history. Now, I know I'm talking about Amityville II: The Possession and not Gandhi, or even JFK for that matter but the principle remains the same.  It's one thing to stretch the truth to make something a bit more cinematic, it's quite another to take the event and construct fantasy from whole cloth. We may never really know what happened that night in 1974 when a young man murdered his family, but one thing's for sure, this ain't it.

Amityville II: The Possession, is actually a prequel to the 1979's The Amityville Horror. As you may remember, the Lutzes bought the supposedly haunted house a year after the prior family, was shot dead by the eldest son. Part 2 is an account of that family.  The first red flag that should be raised is the fact that the real last of that family was DeFeo and, for whatever reason, their name has been needlessly changed to Montelli.

The Montellis buy their new dream house and immediately weird things begin to happen. A faucet pours blood instead of water, the windows are all nailed shut, and there is a strange leaky secret room in the basement. Anyway, a demon or spirit or whatever eventually inhabits the body of the eldest son, played by Jack Magner. He then begins to having fantasies about killing his family, he hears voices through his headphones, he seduces his sister, Diane Franklin, fresh from her glorious star turn in The Last American Virgin and he gives the family priest (James Olson), the stinkeye.

Now, the first half of this flick fairly decent, considering.  It's kind of corny and totally made-up, but it's done with style. The film's centerpiece is the actual murder of the family.  Magner loads a shotgun and tracks his parents and siblings throughout the house in primo horror fashion.  This sequence is truly horrifying, with a masterful use of sound, shadow, music and editing.  Very well done.

Magner is now in jail and Olson makes an unpleasant discovery: the boy is possessed!! At this point Amityville II goes right over the cliff.  Not content with just depicting the events as they happened, the filmmakers wanted to get tickets sold, so we get stuck with a low-rent rip-off of The Exorcist. There is a message that forms on Magner's body in blood, flames from hell come blowing up from the ground at random intervals, a river of blood, ghostly demons, and an actual exorcism that causes Magner's face to slide off in bloody flaps to reveal the true demon inside. The rip-off factor comes to a boil with the priest drawing the demon into himself (just like any other possession flick we know and have already mentioned?). There was so much potential here to make a scary, true account of a terrible tragedy; but I should have known better, after all, the producer of this flick was none other than Dino ("Unfilmable? Pish Posh!) DiLaurentiis.

The Amityville Horror was trashed by critics who said that the film was far too slow (not counting Rod Steiger's horrid performance), that nothing really seems to be happening. The opposite is true here, Amityville II: The Possession is so desperate to scare, that it collapses under the weight of all that fictional nonsense.