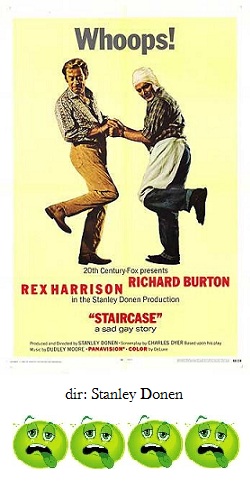 When even the poster art can't treat the movie with any level of seriousness, insulting it like a particularly brainless, sniggering 13 year-old boy, what can be expected from the cast and director?  It's difficult to tell whether Staircase was intended as a comedy or not, but all I know is that I wasn't laughing...at all...not with it or at it.

Yes, Staircase stars mega-hetero actors Rex Harrison and Richard Burton as a gay couple, hairdressers naturally, who spend the film's entire running time bitching and sniping at one another about various issues.  Harrison is getting to meet a daughter he hasn't seen in 25 years while at the same time gearing up to appear in court for soliciting while in drag, and Burton is dutifully taking care of his invalid mother and bemoaning the loss of his hair.  Not exactly compelling stuff here.

Part of the problem is the film's origins as a stage play, adapted to the screen by playwright Charles Dyer, that can't commit to whether it wants to 'open up' the story for the film or remain claustrophobically bound to a stage-like set.  So it does both and succeeds at neither.  We just sit around and watch these two, with brief appearances of Cathleen Nesbitt as Burton's mom, in their apartment or in their salon with a few minor attempts at making all of it look like a movie with a scene or two in a park, on a bus, or on the street.  The dialogue itself is also hard to decipher at times, especially from Harrison who utters the phrase "rub-a-dub" in just about every other line he recites.  What does it mean?  I've not the faintest idea.

But really, the basic failing of Staircase is that of tone, and the fact that neither director Stanley Donen, nor Harrison or Burton, know what to make of this story or know how to present it.  The end product is bizarre to say the least.  Harrison waffles between outsized dramatics and lispy swishiness and Burton minces and whines and cries while wearing a strange wrap around his head because he doesn't want anyone to see that he's bald, as if wearing a totally attention-grabbing, inappropriate mummy rag on the head would be any less noticeable.  Some other cock-eyed scenes that defy easy interpetation would include one where Burton must change his mother's nightgown, she's bedridden due to extreme arthritis, and he yanks it off of her and pulls on a clean one while she yells in pain, and another where Harrison and Burton have a slappy hissy-fight over whether Burton will wear a toupee or not.  In both instances, and many others to be sure, the events are so awkwardly staged and performed that it's hard to know if they were intended as comedy or not.

All of this may have been moot if these two characters were likable in the slightest, but they aren't, and neither Burton nor Harrison try to bring any insight, sympathy or depth to their roles; it's all just behavior with a slight taint of derision.  We as the audience don't care whether Harrison goes to jail, whether Burton will have the guts to wear a toupee, whether Nesbitt will get the medical care she urgently needs, or whether Burton and Harrison's relationship will survive these trials, even though not an ounce of likability, romance or affection is ever displayed between them.

Maybe all involved with Staircase really felt that presenting this 'gay' material would be something of a goundbreaker, but its reception was met with well-deserved silence.  The following year, the truly groundbreaking The Boys in the Band pretty much blew Staircase out of the water.  There were still plenty of detractors who felt that The Boys in the Band was just filled with a bunch of self-hating, miserable homosexuals, but if they watched Staircase, they'd know what miserable and self-hating really was.