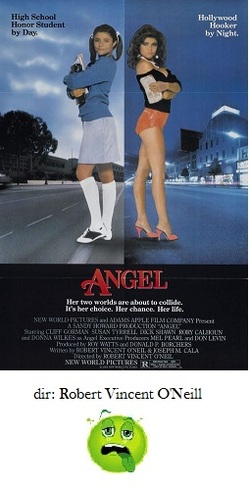 Angel could rightfully be called 'good trash.'  Yes, it's kinda sleazy and exploitive, which is easy to accomplish, but it's surprisingly entertaining and filled with interesting characters giving decent performances, which is far more difficult to achieve.

The poster art for Angel pretty much says it all: "High School Honor Student by Day, Hollywood Hooker by Night."  The movie stars Donna Wilkes as our title character, the 15 year-old, virginal-looking, top-of-her-class brainiac who works the streets at night in order to pay for her tuition.  You see, she's been abandoned by her parents and is now fending for herself, keeping her situation under wraps in order not to be sent into foster care.  But she is not alone, her surrogate family includes a borderline-senile former western movie star, Rory Calhoun, a catty drag queen, Dick Shawn, and her lesbian landlady, Susan Tyrell, as well as her other hooker-sisters.

If Angel had simply examined these characters and developed a portrait of this situation, it might have been some sort of low-budget, trash classic, but unfortunately the screenplay instead involves the very tired and predictable plot of including a serial-killer (John Diehl) who, naturally, targets prostitutes.  Essentially the movie just spins its wheels until another of Wilkes's friends turns up butchered in a motel room.  The real nasty low point involves a scene where it is implied that Diehl is about to have sex with the dead body of a hooker he just knifed.  But at least this plotline adds a detective, played by Cliff Gorman, into the mix, and the relationship he develops with Wilkes, almost as a surrogate father/protector, is nicely written and performed by the two of them.

Wilkes may not have won any awards with her acting job here, but she's fresh-faced, likable and, most importanly, very plausible in the role; she was nearly 25 at the time and easily passes for a jailbait 15.  Compare her to the professional starlets Betsy Russell and Mitzi Kapture who played the role of Angel in the dreadful sequels (Avenging Angel and Angel III: The Final Chapter) both of whom were too old, too hard and much too glossy to be anywhere near as winning or convincing as Wilkes.  The rest of the cast is also quite good, especially Shawn as Mae, the drag queen, but unfortunately he gets offed by Diehl who is in disguise as a Hari Krishna (don't ask).

Those looking for some titillating, mindless fun can do a whole lot worse than Angel; it's quick-paced, energetic and offers up a whole lot more admirable qualities than you'd expect coming from a movie about an underaged hooker and a serial killer.  To make its money back at the box-office, Angel didn't really have to try to be anything but exploitation, but it did try, and as viewers we should be thankful.