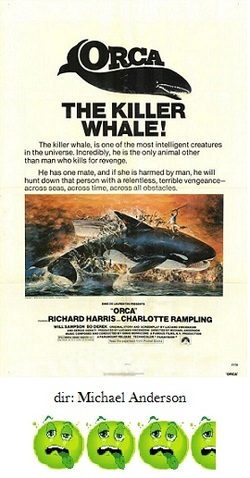 Probably the most famous of the films that bobbed to the surface in the wake of Jaws, Orca (helpfully described in the ads as 'The Killer Whale!'), is a tough, slow, painfully overwrought, would be touchy-feely 'Moby Dick' for the '70s.  The film nearly breaks its spine trying to pat itself on the back for being so much more important than merely a horror movie.  Interestingly, enough Orca is most crippled by an actor (Richard Harris) who never met scenery he wouldn't attempt to swallow whole.  Seriously, this guy eats more of it than the title creature.

Orca deals with a very vengeful killer whale that is out to destroy the man who killed its mate and young.  Harris, is the fisherman who did the killing and figures out the whale's agenda after it strikes back at the local seaside village in which he lives.  This whale is pissed.  But the film makers had other ideas.  One would be tempted to foist all the blame onto director Michael Anderson, but it soon becomes clear that he was just a hired gun and the real culprits were uber-producer Dino de Laurentiis (whose fingerprints are all over some of the worst films ever made) and a couple of Italian screenwriting hacks.  Orca needed to be important, see, so the script offers up the terrible parallel of having Harris also lose his wife and child.  The fisherman and the whale have something in common!  They can relate!  And of course Harris digs in and acts, acts, ACTS!

The bulk of the film is just a bunch of endless dialogue, punctuated once in a while by a very underwhelming bit of violence and destruction until the finale where Harris and the whale go mano a mano in what was supposed to be a very touching ending, but ended up being just a silly conclusion to a very dull movie.

The only thing about Orca that's worth seeing is Bo Derek, in her film debut, get her leg bitten off.  Is that really enough?