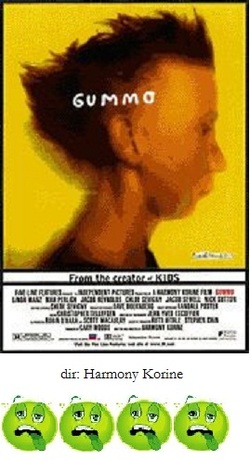 Fresh from the underground success of Kids, screenwriter Harmony Korine decided to take the next logical step and not only write, but direct, what he assumed would be another art-house hit. Hence, we are given the unexplainably titled Gummo.

Set in Xenia, Ohio in the aftermath of a tornado (which is thankfully explained at the beginning because there really is no evidence of one), Gummo is basically a series of unrelated vignettes with the local, trashy residents. No real plot, no real point. Korine obviously was so sure that his hipness would be instantly embraced as a new form of "genius" that he neglected such things as plot, subtext, focus or even acting. The film is programmed as a shock-fest that throws in all sorts of depravity for the sole reason of inducing a reaction at all costs.

What exactly do we have here? Two odd-looking teenagers who kill cats and sell them to a butcher to get money for glue to sniff, two bleached-blonde pieces of jailbait who like to put electrical tape on their nipples to make them stick out, a drunk gay man (played by Korine himself) who tries to seduce and encephalitic black dwarf, two teenage skinheads who punch each other in a kitchen for what seems like hours, a boy who shoots a bedridden, elderly woman in the foot with a BB gun, a boy who wanders around town wearing bunny ears, a man who rents his mentally handicapped wife out to local boys for sex, and on and on and on.

To his credit, Korine does have an interesting style going on. During the course of the film he actually is able to put an almost documentary feel to his material, even getting some town locals (at least they don't seem like actors) to open up and act out for the camera.

Now, I don't have a thing against movies that are considered disturbing or bizarre. But Harmony Korine doesn't compare to filmmakers like Peter Greenaway (The Cook, the Thief, His Wife and Her Lover, Prospero's Books), David Lynch (Eraserhead, Blue Velvet), David Cronenberg (Naked Lunch, Crash) or Alex Jodorowsky (Santa Sangre, El Topo) when it comes to strange, uncompromising material.  Korine's Gummo is strange just for the sake of being strange. There is no underlying message or meaning or reason for the events on the screen, it's just a young director screaming "Hey, look at me! Aren't I cool!".

He says what he says well, but he has nothing to say.