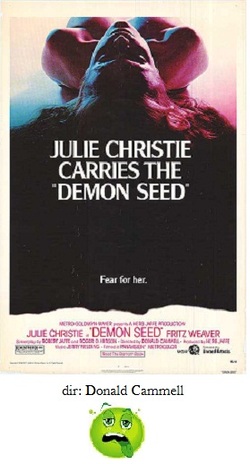 Do you long to see technology run amok? Do you have a burning desire to watch Julie Christie be tied up and abused? Do you love badly dated psychedelic computer animation? Then Demon Seed is the movie for you, a very odd horror film where a computer decides it needs to procreate.

Fritz Weaver, an ace computer scientist, has developed a new super-computer known as Proteus IV (voiced by Robert Vaughn) that is so smart that it cures leukemia in 9 days and develops an almost human personality and intelligence. Anyway, the good doctor is now estranged from his wife (Christie) and Proteus "senses" an opportunity and insinuates himself in her home, where it goes ballistic and imprisons her. What is Proteus's purpose? To make a supers-mart human/computer baby of course.

This is a fairly decent idea for a plot (based on the Dean Koontz novel), but the problems that the movie has to overcome, such as the basically unpleasant, unsavory elements of rape and torture, are wallowed in to an almost offensive degree. How are we, as an audience, supposed to respond to endless scenes of Julie Christie being tied up spread-eagle, fondled, poked, prodded and molested by a computer-controlled robot (which Proteus assembles from electronic appliances), and then being forcibly impregnated while she screams and cries?

The entire film has Christie either bound or trying to outsmart the computer to escape. Strangely, the entire time she is trapped in the house (the film never states, but it seems like she's in there for weeks) only one person ever comes over to see what happened to her. Of course he's beheaded, but since he doesn't just leave the house when he realizes what the hell's going on and goes downstairs to "check it out", he deserved it.  Eventually her husband figures out something's amiss and arrives and finds her after she has given birth. Inexplicably, Proteus self-destructs, leaving the happy couple to duke it out over whether the baby should live or die (Christie has the right idea-Kill the damn thing!, but Weaver wants it to live). Try not to laugh when the squalling metallic infant crawls out of the incubator.

The last shot gives us a twist ending that can be seen from miles away. But at least they tried. The director of this movie was Donald Cammell who didn't get to direct again for ten years, wonder why?  All in all Demon Seed is sometimes tough sit through without wincing, unless, of course, bound and gagged women are your thing.