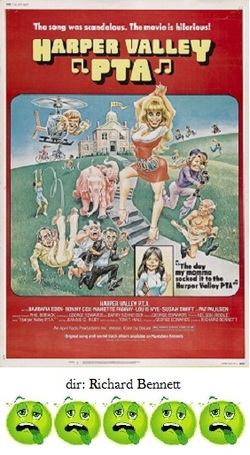 There is hardly a worse idea than to base an entire film on a country song. But in the late '70s and early '80s there was a small batch of said films that were taken from hit "story-songs", all of which ranged from pointless to plain horrid.  See The Night the Lights Went Out in Georgia, Ode to Billy Joe, Convoy, Take This Job and Shove It or any others to prove my point. One of the worst of the batch was definitely Harper Valley P.T.A..

For those who may not be familiar with the hit song by Jeanie C. Riley, here is a quick synopsis: Junior High school girl gets letter from P.T.A. which states that her mama wears her skirts too high and runs around with men, drinking, carrying on and is an unfit mother. Mama goes to the P.T.A. meeting and calls out all of the members as being hypocrites, exposing their dirty secrets to the whole auditorium. Thus, that's how she "socked it to the Harper Valley P.T.A.". End of song.  So, I watched this movie wondering how they could possibly stretch this extremely thin story into feature length. Imagine my surprise when the entire plot of the song was over and done with within the film's first 15 minutes!

Barbara Eden (yes, Jeannie, that one we dreamed of) stars as Stella, the mama in question. Her daughter, Dee, brings home the P.T.A. letter which inspires her revenge. With the help of her friend Alice (Nanette Fabray) she finds out all of the P.T.A. council's secrets. At the next meeting, Stella jumps the stage and tells of everyone's dirty secrets, then she and Dee leave.   And we still have an hour and fifteen minutes left to go!

Needless to say, the rest of the movie is just too awful to be believed, just an endless, repetitive series of would-be zany gags, and emphasis on the word "gag". You see, after the P.T.A. meeting, the council attempts to drive Stella out of town, so she concocts her revenge against them. The movie goes into a braindead cycle: someone slights Stella, she and Alice exact revenge....over and over and over until all of the council has been put in their place and Stella wins the presidency of the P.T.A.

First, Stella causes the rich-bitch current P.T.A. president to lose her hair (through Alice, who is a beautician) all the while in disguise as one of her maids at a dinner party. When the rich-bitch realizes she's bald, she screams. Then the camera goes into freeze-frame and we hear an instumental warbling of the theme song. And this is repeated again and again.  Stella entices one man into a motel room and then locks him out naked where he is picked up by the cops (Freeze-Frame, theme song). She films another female teacher having sex with the mailman and then slips in the film during that teacher's class where the students see it (Freeze-Frame, theme song). She steals several elephants from the circus, paints them pink and sends them crashing through another councilman's house (I kid you not) (Freeze-Frame, theme song). You get my point.   It's amazing what this woman can do!! Not only can she disguise herself as a maid, or as a nun, but she is able to shanghai circus elephants, slip films into the school (knowing of course, exactly what film will be shown to what class on which day apparently memorizing the course preparations for every teacher in the school), and....oh but why go on.

This movie just has no reason to even exist. But since it did exist, why couldn't the filmmakers and screenwriters at least TRY to put a little wit and intelligence into it? The so-called comedy here is just so inane, so lobotomized, as to defy description. The film even looks cheap and slipshod, with continuity errors, logical flaws and editing mishaps that remind one of a student-film that didn't get a particularly good grade.

The acting is marginal I guess, but not a whole lot is required when you have a screenplay like this. Barbara Eden is likable enough, but the screenplay makes the even bigger mistake of trying to turn her and Nanette Fabray's characters into sub-basement versions of Lucy and Ethel. Seriously! Eden will get an idea and her eyes light up, then Fabray will say something like "I don't like that look in your eyes! I won't help you this time!"..then they go on their zany adventure, stealing elephants or loading up cars with horse manure. Haw haw.

Harper Valley P.T.A. is one for the Jeff Foxworthy crowd. It's simply a total waste of your memory banks. If you've forgotten all about this useless film, count yourself lucky.