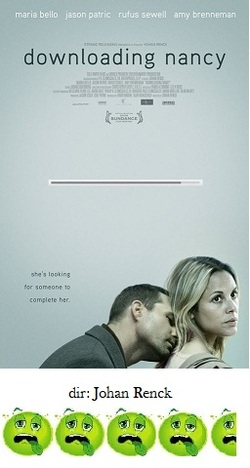 With Downloading Nancy, we are presented with one of the dreariest, most pretentious, feel-bad psychodramas to see the light of day in quite some time.  Our title character has a death wish, and I think every audience member watching this would gladly stand in line to make that wish a reality.

Maria Bello stars as the suicidal character in question.  You see, she's married to Rufus Sewell and she is miserable.  So miserable, in fact, that she reaches out via the internet to find someone who can use her as a mindless, masochistic sex toy and then kill her.  Fun, fun.  That someone turns out to be the equally unbalanced Jason Patric.

Anyway, Bello leaves Sewell and shacks up with Patric, and the two of them play such kinky sex games as Patric tying a naked Bello to a bed and then tormenting her with a giant shard of broken glass.  Another activity involves Patric leading a barefoot and blindfolded Bello across the living room floor that he's covered with mousetraps.

I guess all of the nonsense going on in Downloading Nancy could've ammounted to something worthwhile, but the script makes the fatal mistake of never getting to the bottom of why Bello wants to undergo all this misery.  Yes, she's depressed.  We get that.  But why?  No idea.  Another problem is the fact that the script makes Bello's character so aggressively unpleasant and unlikable.  Throughout the entire film she screeches and lashes out and cries pitiously and bitches and complains and shirks blame and verbally abuses just about everyone she meets.  We hate her.  She wants to die?  Good.

Annoying also is the constant jump-cutting back and forth through time with scenes of Bello and Sewell's dead marriage (I blame her), Bello undergoing therapy with shrink Amy Brenneman (probably filmdom's least convincing or competent therapist), Bello and Patric playing out their twisted relationship, and Patric who has shown up at Sewell's house for no other reason than to give Sewell an opportunity to learn what is happening/has happened with his wife.  He even retaliates by beating Patric with a golf club, which turns out to not be so effective since Patric loves it.  The way all of this is randomly spliced together is a clear indication of a director trying to fool an audience into thinking there is a lot more going on on the screen than there really is.

So, does Patric kill Bello?  Well, duh.  If he didn't, Downloading Nancy would have even less of a reason to exist than it already does.  What does all of this mean, exactly?  I haven't the foggiest idea.  I'm sure there's some sort of meta-feminist slant to it all, but it's not worth thinking very long or hard to uncover it.  Tedium, thy name is Nancy.