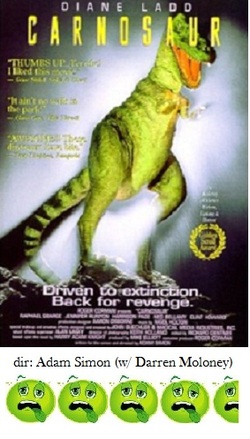 There may have been a nugget of a good idea buried deep within Carnosaur.  Unfortunately, whatever it may have been, it was suffocated beneath bad special effects, threadbare sets and a completely nonsensical script.

In order to cash in on the upcoming Jurassic Park, king of the cheapies Roger Corman rushed out his own dinosaur epic.  But it's pretty clear that cameras started rolling before it was anywhere near ready to shoot, almost as if it were being made up as they went along.

Carnosaur stars Diane Ladd as a brilliant but demented geneticist who, in her underground bunker, is devising a masterplan to wipe out the human race and recreate dinosaurs to take over the planet.  How?  Best as I can figure out there is a virus or something that she releases which begins sickening the local population.  Pretty soon, the infected women begin showing signs of pregnancy, and then they give birth to giant, slimy dinosaur eggs which will hatch out baby dinos.  Men seem to show signs of illness as well but nothing really seems to happen to them.  While women are being mangled in egg-birth, there's also one of the most laughably phony T-Rexes ever prowling around and it occasionally chomping down on any errant humans that get in the way.  The attack scenes usually comprise of a closeup of the dinosaur puppet-head and then the victims fling themselves against a car window spitting blood to indicate that, yes, they did get bit.

Eventually, our hero, Raphael Sbarge, is able to find a serum for the infection (conveniently in a large, helpfully labeled jar), but is killed by the military who show up out of nowhere to burn any evidence of the epidemic.  Ladd herself even gets sick and has her very own birthing scene.

The only positive criticism I can give Carnosaur is that Ladd gives it her all.  She is delightfully crazy, but she's not on screen all that much.  The rest of the cast, which includes bad omen Clint Howard, might all equal one personality if they were all added together.  The plot and the plan make absolutely no sense, so it's impossible to really follow the hows of the infection or to feel any sense of suspense or apprehension about who gets sick or why or where.  It just is.

The only way to enjoy Carnosaur is by getting very, very drunk, or to partake of whatever mind-altering substance you may prefer.  Watching it completely sober is no fun at all.