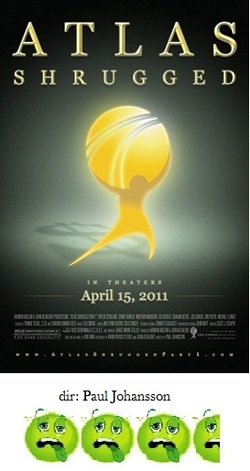 Is there an author out there whose body of work is less suited to the film medium than Ayn Rand's?  If there is, I'd like to know.  Her works are inherently philosophical, thoroughly cerebral and often bloated, the combination of which is a recipe for movie disaster.  Taking on Atlas Shrugged is a bold move, indeed; unfortunately, without anything resembling talent in front of or behind the camera, failure was assured.

In 1949, legendary director King Vidor and mega-stars Gary Cooper and Patricia Neal made hash out of Rand's The Fountainhead.  So, if these huge, huge talents couldn't make one of her gargantuan tomes into anything anywhere close to a good movie, it's pretty much a given that an unqualified director with an amateurish cast and virtually no budget to speak of wouldn't either.

Atlas Shrugged Part 1 is about as interesting and entertaining as watching paint dry, and yes, that's a slam against paint.  The plot involves a young female executive for a railroad company, blandly portrayed by Taylor Schilling, who wants to move forward with a new innovative railroad design using a special, untried form of steel.  For an eternal hour and a half, we get conversation after conversation in boardrooms, offices, lobbies, and factories which all can be boiled down to "How's the new steel coming along?," "The new steel won't work," "Don't use that new steel," and, "Nyah Nyah, the new steel worked."  Seriously, a powerpoint presentation about this subject would've been more stimulating.  After awhile, all of this flat, uninteresting, and static dialogue turns into a soundless drone, and any intended message gets completely lost.

Why did actor turned director Paul Johansson choose this impossible task for his feature film directorial debut?  Based on the chintzy budget on display, it's pretty obvious that almost nobody had faith in this project, and despite a couple of minor-league faces (Michael O'Keefe, Armin Shimerman) the cast is uniformly lousy.  They all enter rooms, plant their feet and appear immobilized by the stilted dialogue.  They are bored performing it and we are bored watching them do it.

The scariest thing about Atlas Shrugged Part 1 is that it is merely the first part in a planned trilogy, so we can expect two more of these things.  It sounds more like a threat than a promise.