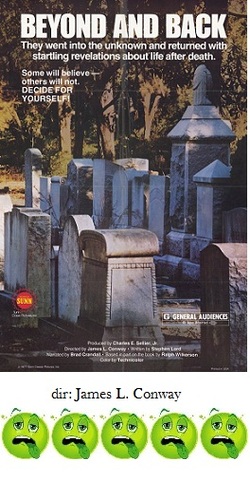 Have you ever longed to watch a theatrically-released documentary that has all of the artistic value of a particularly sub-par classroom educational film?  If so, I present Beyond and Back, a nearly unwatchable examination of near-death experiences.

Beyond and Back should be called a "documentary" (quotation marks intentional) since it is comprised entirely of wooden reenactments of supposedly true cases of those people who officially died, but came back to tell their tales.  The entirety is narrated woodenly by a guy (or "doctor") with one of the world's worst toupees.

The movie falls into a repetitive rhythm where Doctor Guy deeply-intones about a person who either "died" in a car accident or a plane crash, or suffered with cancer, a heart condition or pneumonia.  All of these incidents are reenacted by a bevy of lousy actors and actresses while these same actors and actresses do the voice-over narration with all of the passion and inflection of "pass the ketchup."

While these "subjects" are sharing their "experiences" we get the same "special effects" of someone shining a flashlight at the camera lens (this is supposed to represent "the light" that they all see), or "tunnel of light" which looks more like someone rotating a Lite-Brite against a black background.

Getting into the spiritual meaning of all of this is fruitless.  It's not like any of this can be proved or disproved.  Anyway, some of the "subjects" encounter a divine presence, some don't, except, or course, for the one person who attempted suicide and is plagued by visions of Hell's demons.  But regardless of the viewer's own personal beliefs, every "case" here is as dry and boring as possible.

You'll notice that I've used quite a lot of quotation marks throughout this review of Beyond and Back.  It's a "documentary" about "subjects" who "died" and have "experiences" reenacted by "actors" and "actresses", all told to us by a "doctor", who claims all of this is "true."  "True" or "not", Beyond and Back barely registers as a "movie" at all.