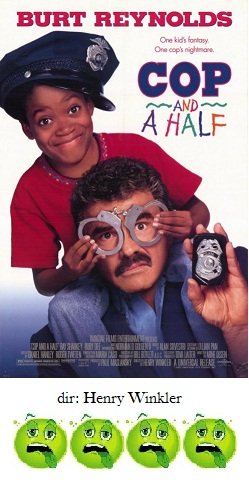 Reynolds stars as a surly cop (is there any other kind in Movieland?) looking to bust a local mafia drug cartel, and the whole case hinges on the fact that little Norman D. Golden II has witnessed a murder and has the information the police need.  Golden's dream is to be a cop, therefore, he won't give up that information until he gets to join them on the investigation so, naturally, he is assigned to be Reynolds's pint-sized partner.  Could you gag?

Basically, the entire movie consists of the un-hilarious banter between Reynolds and Golden that is all meant to be just too cute for words, but is really like nails across a chalkboard.  They bicker and butt heads but, you know, eventually Golden will warm Reynolds's heart and they will unite together to solve the crime.

It's true that Reynolds hasn't exactly been all that discriminating when it comes to picking projects to star in, but what he or director Henry Winkler found in the script for Cop and a Half that was deemed worth doing, is a huge mystery.  The script is credited to Arne Olsen, but it really feels like something that a computer might cough up if there was a program to write the typical cop/buddy movie.  The most awkward scene in a movie rife with them has to be the moment in a bathroom where Golden is brushing his teeth and Reynolds just walks in to piss, and then Golden wants them to "play swords."

As far as the crime plot goes, it's all beside the point.  The mafia here is your typical "movie mafia," a group of dunderheads that are so stupid they barely have the intelligence to avoid swallowing their own tongues let alone being able to carry out any sort of drug-ring masterplan.  Ray Sharkey is the head moron in this gang of morons, whose sole touch of personality revolves around his continuous crooning of old rock songs from the '50s and '60s.  Why?  Why not?

I imagine that Cop and a Half may appeal to young children where Golden's adventures may fulfill some vicarious thrills for those excited by police work and catching criminals.  For anyone else with a mental capacity above the average elementary school child, there is nothing here on which to waste one's time.