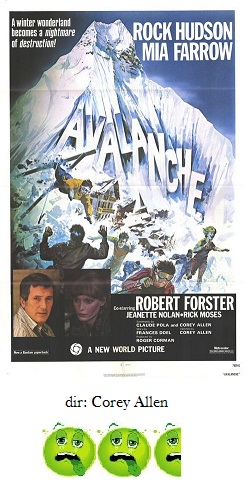 After the great successes of such big-budget, all-star disaster vehicles as Airport (1970), The Poseidon Adventure (1972) and The Towering Inferno (1974)  made big bucks at the box-office, every studio quickly churned out their own variations on the genre, that is until the law of diminishing returns kicked in.  Avalanche is a pretty dull attempt to generate soul-quaking fear about falling snow.

Those who are wanting terrific scenes of destruction will be sorely disappointed since the title event doesn't even occur until over two-thirds of the movie is over.  Until then we are given many, many boring scenes of divorced couple Rock Hudson, who owns the swanky ski resort where the movie takes places, and Mia Farrow going through an on-again, off-again relationship that no one could care less about.  Will they get back together again?

Another major character in Avalanche is Robert Forster, an environmentalist photographer who is the sole voice of reason in warning everyone who'll listen to understand the fact that the continuing deforestation of the mountain by Hudson will lead to disaster.  His is the only other character that's given any form of dimension.  Others include Jeanette Nolan as Hudson's mother, Rick Moses as a womanizing and inexplicably popular skier, and various other skiers, skaters, snowmobilers and sports commentators who serve only as being recognizable faces we can pinpoint once the avalanche happens.

Yes, Forster keeps on with his Chicken Little impression, Hudson keeps uttering "Pshaw" and the snow keeps piling up until, finally...finally the avalanche happens.  At times, these scenes are scarily effective, such as the moment several vacationers are trapped at a chain-link fence and begin trampling each other in terror or the one where there is an attempt to save a man and his son who are stuck up on the ski-lift.  Others are very lame, what with the bad special-effects of rushing snow that look absurdly phony and laughable.

After the avalanche comes, the rescue attempts and searches for buried bodies begins in earnest.  Most of our characters bite it; the most entertaining being the wreck of the ambulance that's supposed to be carrying Nolan to safety that ends up plummetting off a cliff.  Forster gets his "I told you so" moment and Farrow leaves Hudson for good.

The biggest problem with Avalanche is the fact that its pace is so grindingly slow.  Since there's nothing about any of these characters to hold our interest, it turns into an endurance test until the titular event occurs, but when it finally does, it happens so fast that it kills any feelings of suspense.

Of the disaster films from the 70s, Avalanche doesn't reach the greatness of The Towering Inferno or the gleefully absurd fun of The Poseidon Adventure, but its certainly is better than such dogs as The Swarm and When Time Ran Out...  If  this is the sort of thing you enjoy, have at it.  You can do worse.