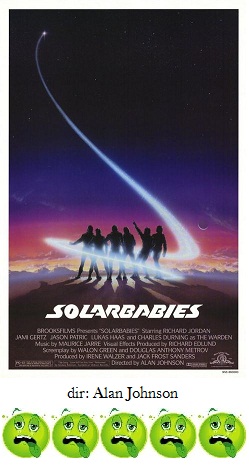 Here's a shambling wreck of a sci-fi action movie that is an affront to anyone that has a brain.  Or even half a brain.  Even for the 1980s, there aren't many major releases as puerile as the horribly-titled Solarbabies.

Sure, I know, I'm not exactly the target age-group for Solarbabies, but I'm not sure who would be.  The story takes place in a post-apocalyptic future (is there any other kind in the movies?) where the planet has been reduced to endless deserts, water is a precious commodity and children are regularly rounded up and sent to government run orphanages.  These orphanages are sort of a combination of prison farm, work camp and roller rink.  Really.  Apparently, some of the kiddies have organized into cliques, or teams, to compete with each other in 'skateball', a sport where they all skate around in a circle with lacrosse sticks, trying to hurl balls into a center target.  Now, even though the opening scene of the film is of a clandestine skateball match between the evil Scorpions and, our heroes, the Solarbabies, the game has nothing really to do with the movie at all.

The Solarbabies are comprised of such future stars as Jason Patric, Jamie Gertz, Lukas Haas and James LeGros, and the main plot involves Haas accidentally finding a glowing ball of energy.  This ball, inexplicably named 'Bodai' is so powerful, he (yes, the characters use this pronoun, so why not continue?) cures Haas's deafness, can make it rain at will, and can disintegrate into pixie dust and reintegrate elsewhere; however, he's not smart enough to use this particular reintegration power when he could really use it.  Anyway, Bodai is stolen, and the Babies go skating out into the dunes looking for him.  The kiddies just skate and skate, escaping run-ins with bounty hunters, and evil orphanage president Richard Jordan who wants Bodai for himself.

One hilarious sequence involves a building explosion that the Babies think Gertz has died in; a scene later has the rest of the Babies being captured by the bounty hunters only to have Gertz magically appear with a band of 'Eco-warriors' to free them.  They are brought to the underground Eden where the Eco-Warriors live and Gertz intones "This is where I live."  Uhh...how long exactly have the Babies been trekking out in the desert without water?  Anyway, the Babies find Bodai at the water distribution fortress where Jordan tries to 'disembowel' Bodai, but fails.  Until then, Bodai just lays there taking torture and lasers and at the last minute just jumps free and does the pixie-dust thing.  The bad guys lose, the dam is busted, and the Solarbabies create an energy circle.  The end.

Maybe Solarbabies would appeal to kids.  Really, really, little kids.  The story is painfully juvenile, sickeningly sincere and oh so hippy dippy happy.  But there's no joy here, it's just crass and obvious.  It's far too stupid for anyone whose age is more than one digit, but its garbled story of glowing orbs, miserable orphanages, skateball, and Eco-Warriors is too inepenetrable for the rest.  Solarbabies is just a title that everyone involved no doubt leaves off there resumes.