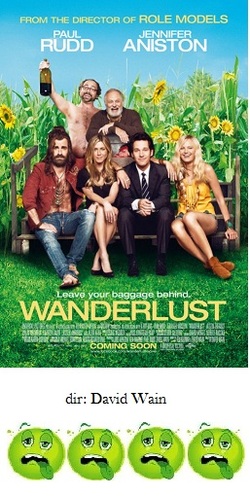 Here is another one of those sit-com level movie comedies that isn't funny or clever or....well...anything remotely inventive or original.  Take out the nudity and profanity and that's what you'd be left with: a misbegotten television pilot that, if it were picked up by a network, would be cancelled within a month due to its low ratings.

Once upon a time there was this actress from this television show called "Friends" and she became like this really big star and then she did this one movie called The Good Girl and it garnered her some Oscar talk.  Yes, I'm talking about Jennifer Aniston, and Wanderlust continues her 10-year long, nearly unbroken stream of losers.  Let's see, there is Along Came Polly, Derailed, Rumor Has It..., Friends With Money, The Break-Up, Love Happens, He's Just Not That Into You, The Switch, The Bounty Hunter, Management, and Just Go With It.  The sole bright spot came with Marley & Me, but that was a success due to the cute dog and not her acting.

Wanderlust also takes down Paul Rudd's reputation a couple of pegs as well.  Anyway, Rudd and Aniston are a couple of New York yuppies who've fallen onto hard times.  Just after purchasing a condo, the company Rudd works for gets taken down in a financial scandal and Aniston fails to sell her documentary film about testicular cancer in penguins to HBO.  Losing everything, they leave and travel south to move in with Rudd's highly-obnoxious brother Ken Marino, but along the way their GPS sends them to the hippie-dippie, bed and breakfast commune, Elysium.  Oh what hijinks ensue!  Not so much hijinks as boring and predictable anti-hippie jokes (all natural food? yeck!) to just plain disgusting ones, such as the scene where hippie couple Lauren Ambrose and Jordan Peele carry around their newborn baby whose still attached placenta sits in a dish to wait for it to fall off naturally.

First, Rudd and Aniston aren't too thrilled about the commune, filled with groovy drugs, nudity, free sex, and selling produce, all under the sway of commune-leader Paul Theroux.  But Rudd finds this freedom refreshing against Aniston's wishes and they bicker.  Then after the brief, abortive visit to the brother, they decide to go back, and this time Aniston loves it and Rudd is over it...and they bicker some more.  And then there is this uber-lame subplot about an evil bunch of land-developers who want to buy the commune's property to tear it down to build evil retail establishments.  Oh will they ever find the deed to the land?  Who cares?

Across the board, the performances fall flat.  Aniston plays the exact same character she's been playing, without any variation of quirks or hairstyle and Rudd flounders repeatedly with his nutty nice guy routine and provides one of the worst single scenes in all of 2012 as he talks to himself in a mirror trying to boost his courage to bed lovely Malin Ackerman.  This particular scene goes on for at least 5 straight minutes, but it feels like 55, and nothing he says elicits anything close to a laugh...or even a lonely, wayward chuckle.

I will say this much about Wanderlust, it's still miles better than 2010's miserable The Bounty Hunter, but that's not saying much.  Hopefully Rudd can get his career back on track (the trailer for 2013's Admission doesn't look to be that hit he needs), and as far as Aniston goes, I expect more of the same for the next decade.  For some people, that will work just fine, but for me all I can say is "No more."