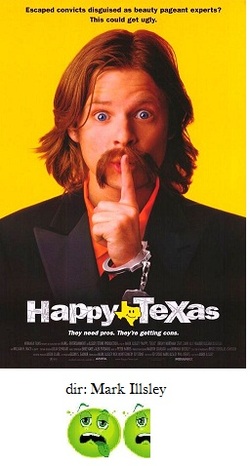 Some may remember the controversy over Happy, Texas from that year's Sundance film festival. You see, there was this bidding war amongst the film companies over distribution rights for this film. Miramax won the war, shelling out a ton of cash for such an inconsequential comedy as Happy, Texas. When the movie opened nationwide, it promptly bombed. The pain for Miramax was probably quadrupled because they had passed on The Blair Witch Project, which of course made a fortune.

What is the moral of this story? Regardless of your opinion of The Blair Witch Project, you have to admit it was a fine example of original filmmaking. It turned heads, it piqued curiosity. And love it or hate it, it prompted a true heartfelt reaction. Happy, Texas is simply an assembly line, feature-length sitcom that studios churn out every other week. Audiences had been there and done that.

Happy, Texas is nice enough I guess, but it is a case of missed opportunities. The setup is thus: two convicts, Jeremy Northam and Steve Zahn, escape from a roadwork crew and steal an RV that belonging to a gay couple who work as  beauty pageants directors. Anyway, the two wind up in a town called, yes, Happy, Texas, and, of course, this is the town the pageant directors were supposed to be in anyway. Coincidence? Maybe. Contrivance? You betcha. So now the convicts have to pretend to be David and Steve, a gay married couple, and they have to organize a beauty pageant for several young girls.  The Little Miss Fresh Squeezed Pageant. Ha ha.

Now this setup has tons of potential for high comedy. Mel Brooks or the Farrelly brothers could have done wonders with the material.  However, the filmmakers wanted to go the easy, sincere, sweet route, and we get a much lesser film for their troubles.  The convicts decide that while in town they will organize the pageant until they can rob the local bank. Northam befriend Ally Walker, the owner of the bank, to get the key and the vault combination, while Zahn watches a few pageants on tape, and then, miraculously, becomes a hit with the contestants.

The movie's only high point, is the character of the Happy, Texas sheriff played by the always great William H. Macy. The sheriff is a closeted homosexual and falls in love with Northam. Macy's performance is subtle and realistic and when he is spurned, you feel genuine sympathy for his character. We care about what happens to him. Unlike our opinion of everyone else.  This all culminates with a showdown and shootout at the bank, all of which happens during the big pageant. Can the convict ever express his true love to the banker? Will the girls win the big pageant? Do we care? Maybe. But the movie doesn't even give us a payoff to who wins the big pageant.

The guys go back to prison, better men than they were before. Oh well. Such is the plight of the on-the-road gay pageant director.  Happy, Texas is sitcom lite of the most sickeningly sweet variety. Predictable and uninspired, it evaporates from memory mere seconds after viewing it.