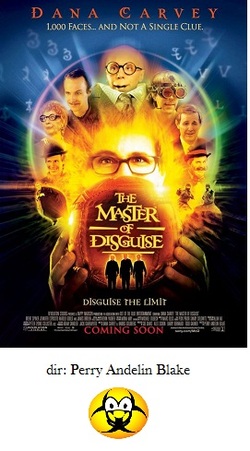 If you're wondering why Saturday Night Live alum Dana Carvey never made a successful transistion to the movies, look no further than The Master of Disguise, a would-be comedy so moronic that while watching it you can actually feel your brain cells committing harakiri.

Carvey is Pistachio Disguisey, the latest in a long family line of Masters of Disguise following father James Brolin and grandfather Harold Gould.  The plot revolves around evil Brent Spiner who has kidnapped Brolin and wife Edie McClurg in order to steal the world's great artifacts like the Mona Lisa, The U.S. Constitution etc.  So it's up to dunderheaded Carvey to rescue his parents.

When I say Carvey is dunderheaded, I'm being kind; it's more like he's seriously brain-damaged.  When we first see Carvey he's wielding a hockey stick while wearing underwear on his head and a shaving cream beard, so that's not surprising.  This should give a clear indication of the level of humor employed in The Master of Disguise.  I'm not looking down my nose at silly comedies as if I'm above it all because, admittedly, I still laugh at Ace Ventura: When Nature Calls every time I see it.  The Master of Disguise can't even reach the intellectual level of an Ace Ventura movie.

The whole film is a laughless wasteland.  Naturally, Carvey goes through a large repertoire of disguises and personalities and fails in every single one of them.  Whether he is aping Al Pacino circa Scarface, creating the deeply creepy Turtle Guy, or camouflaging himself as a cherry pie or cow manure, the stink of desperation hangs over Carvey like a toxic smog.  But he only has himself to blame, after all, he co-wrote the screenplay.  Of course, Adam Sandler's production company, 'Happy Madison', helped in the creation of it, too.  Usually, 'Happy Madison' movies, as bad as they are, at least go for broke in their tastelessness, hoping for accidental laughs through sheer audacity (see, or better yet don't see, Grown Ups, Strange Wilderness, Grandma's Boy, etc.).  Now imagine those movies stripped down into PG-rated mush.  Scary, no?

Maybe certain slow-witted elementary school-aged kids could possibly find something amusing about The Master of Disguise.  I just can't imagine anyone with a fully developed brain being more entertained by The Master of Disguise than viewing a test-pattern for the same length of time.  I have to say, when I go over my list of the worst movies ever made, this one will probably be prominently featured.