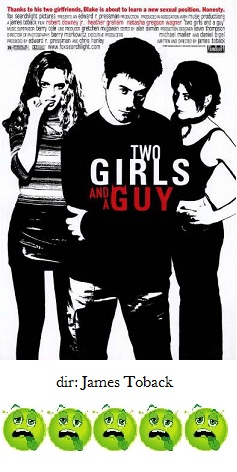 This movie is like Chinese Water Torture. Each line of dialogue is like a tiny drop of water that smacks me right between the eyes as I struggle to free myself. And then again....DRIP! You see, James Toback's Two Girls and a Guy has exactly one idea, one point-of-view, one theme. And then....DRIP!...smack between the eyes. Then I scream.

Two Girls and a Guy tells the story of a struggling actor, played by Robert Downey Jr. (who also lives in the nicest, most luxurious New York apartment that an unemployable thespian can't possibly afford). You see, he has two girlfriends, Heather Graham and Natasha Gregson Wagner. They meet outside of his apartment building waiting for him to arrive home from a trip, and after a brief conversation, they realize that, yes indeedy, they are BOTH girlfriends of his and have been betrayed. So far so good, I guess.

Anyway, Downey arrives and the girls call him out, and for the next 80 minutes the three sit around and bitch and moan about their relationship(s). DRIP! In fact there are exactly two lines of dialogue for the remainder of the movie" Graham and Wagner repeat ad nauseum "How could you be so selfish and do this to us?" and Downey says "You don't understand!"

To spice up the boringness of it all, there is some fully clothed simulated oral sex that earned this flick an NC-17 for the home video release. Let me save you the trouble. IT'S BORING! Don't even bother on just a prurient level. Also, the big PLOT TWIST of the whole shebang has Wagner revealing that she has sex with women and wouldn't mind having a bi-threesome type relationship with them. Ooooh, it's, like, so cutting edge!!

The performances are fine, but these three are given exactly nothing to do.  The theme of relationship fidelity is brought out at the beginning and is hammered into the ground over and over again. It's like some insane pianist who plinks the same key for 90 minutes and you're supposed to call that music. I think not.  Anyway, nothing is solved. At the end Downey's mother dies and all are sad.

All I can say is, please kill me before another drop hits my face. I just can't take it anymore.