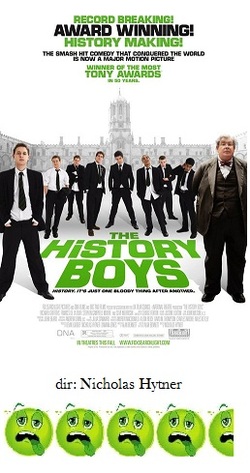 1)  The Casting:  It would've seemed a terrific idea to cast the film adaptation with the very actors who brought the material alive so successfully on stage.  But the camera doesn't lie.  This group of actors, who are supposed to be playing high school boys, are all easily 10-15 years too old for these roles.  On stage, no one would notice, but on film, every wrinkle, double-chin, and set of crows-feet  is front and center.  Why no makeup to at least smooth out these rough edges?  So, basically, these guys look like they've flunked and repeated grades many times before this supposed golden year as seniors looking to gain entry at Oxford.

2)  The Setting:  Adapting a stage play for the screen is always a tricky endeavor.  Sometimes opening up the play beyond the confines of the stage destroys its integrity...but sometimes not doing so makes the film feel too claustrophobic and, well, stagey.  The History Boys does neither...well, actually it does both.  The bulk of the movie takes place within the walls of the school and classroom with occasional scenes outside of it, but it's obvious that these outside scenes were made just to give the appearance that they opened it up, because they are entirely extraneous.

3)  The Script:  I suppose the constant, incomprehensible, intellectual ramblings of these boys, as well as their bizarre, unrealistic, impromptu skits probably worked well on stage...but on film, they are dull.  Really dull.  Deadly dull.  Making matters worse is that all of the actors have such thick British accents that you practically need subtitles to even understand what's being said or why.  But that would require actual effort on the part of the viewer, and more likely than not, the viewer just won't care enough.

4)  The Subject Matter:  The most unsavory subplot has to do with the homosexuality of one of their beloved professors, played by a corpulent Richard Griffiths.  The fact that he is gay isn't the problem.  The problem is that he takes every opportunity he can to get his hands down his students' pants.  These incidents are laughed off by the lads and Griffiths is still looked upon with reverence.  Sorry, no dice.  Griffiths isn't awe-inspiring, he's just creepy.

The movie version of The History Boys is just a numbing slog.  It's possible that the only ones who like this movie are the ones who are familiar with and enjoyed the play.  Unfortunately, the movie is only going to serve to keep droves of potential theatre-goers far, far away.