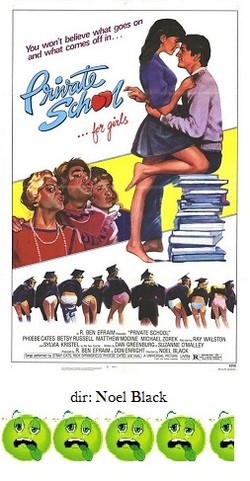 The teen sex-comedies from the 1980s weren't exactly bastions of great cinematic story-telling, but at least most of them had plots, however simple-minded those plots might've been.  Private School, however, doesn't bother itself with anything too complicated, like a real story or script.

There truly isn't any kind of plot here...at all.  Private School is just an episodic bunch of flimsy comedic scenes involving the sexual shenanigans of the girls at Cherryvale (ha) Academy and their boyfriends at Freemount (ha ha) Academy.  The main topic of conversation between our two romantic leads, Phoebe Cates and Matthew Modine, is whether or not they'll ever get around to 'doing it.'

We have scene after endless scene of the guys from Freemount desperately trying to get a gander at the naked boobies of the Cherryvale girls.  They climb on each others' shoulders in order to peek in the shower-room windows and, in the torturously protracted centerpiece, they dress in unconvincing drag to sneak into the girls dorms.  I suppose this could've been funny had the guys not looked so completely unconvincing in wigs and dresses, or if they did anything other than shake and salivate like starving mutts at the very notion of getting into the girls' rooms.  But as it is, there is absolutely no payoff.

Does Private School provide the requisite thrills of copious amounts of female flesh?  Well, boobs get bared pretty often, but they are almost exclusively the boobs of Betsy Russell, who plays the beautiful and villainous class bitch who tries to land Modine in the sack in order to get back at Cates, whom she hates.  In fact, regardless of what scene is transpiring, Russell will wind up topless.  She even gets filmed in slow-motion while doing a bit of unexplained, topless horseback riding.

Private School just doesn't have much of anything to offer.  The sex isn't sexy, the nudity gets old really quick, none of the actors have characters to play, the attempts at humor fall flat, and all of it will bore anyone over the age of 12.  It's movies like Private School that make one appreciate the comedic brilliance of Porky's and Screwballs.