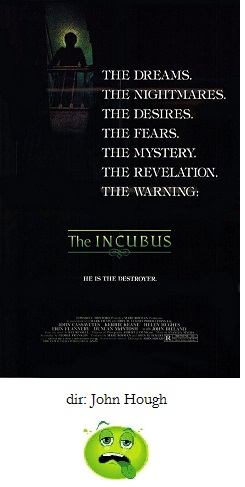 Reviled in its day as one of the worst horror movies (maybe even one of the worst movies ever, period), The Incubus is actually a fairly interesting, albeit gross and somewhat offensive, flick. I am still not sure why it was trashed so bad critically; there are much, much, much worse ones out there.  I think it's because the subject matter was too much to take in 1982, today it would barely cause a ripple, if that.

In the small town of Galen (don't know what state, I think the film forgot to mention it), a series of bizarre rape-murders are taking place. At the beginning, a teenage girl is raped and her boyfriend is murdered; she survives and is taken to the hospital and is examined by the local chief medical examiner, played by John Cassavetes of all people. The girl is injured so badly they have to perform an emergency hysterectomy to control the rupturing and bleeding. Needless to say she is too traumatized and comatose to help find the perpetrator.

Next we meet a teenage boy named Tim who lives with his strict grandmother. He is plagued by nightmares involving a torture chamber and a woman who is being forced to give a confession while surrounded by several hooded figures. It seems that every time he has this dream, another person in town dies.  The local museum director is the next victim, she is raped to death. Cassavetes notes that she was internally damaged as well, and that her ruptured uterus was also caused by the gigantic amounts of sperm inside her. Could this be the work of more than one man?

Anyway, that's basically how the movie goes. The boy, Tim, becomes more and more deranged, believing his dreams are manifesting the deaths, and then,  periodically, another woman is killed.

As you can see, the details of The Incubus are pretty grim and distasteful, and one scene, where we are given the point of view of the killer as he "does the deed" with another victim while she screams in pain, is pretty reprehensible. But, with those things aside, the story is surprisingly interesting and we are pulled along with the investigation. What does Tim have to do with the deaths? What is the 'Incubus', exactly, and why is it trying to procreate? What does the the torture chamber have to do with it?

The performances are kind of bland; Cassavetes actually seems shell-shocked most of the time. But the direction by John Hough works the story with suspense in mind, keeping the abhorrent material as subtle as possible (in a movie dealing with gallons of weird semen inside mangled women, that is a major achievement indeed).  The final passages leave a lot to be desired though, just as the tension should be ratcheted up a few more notches for the climax, the pace begins to slow down, making the resolution feel a long time in coming. And when we do finally get a look at the Incubus itself, the really nifty make-up job is on screen for barely 10 seconds and that's it. Cool twist ending though.

It's true, the subject matter of The Incubus is fairly repellent, but I think it was unfairly labeled as one of the worst films ever made. Just a little toning down of the grosser aspects of the plot and upping the make-up job and atmosphere and you'd have a hell of a scary remake on your hands.

I'd like to think someone would want to give it a try, but I wouldn't bet money on it.