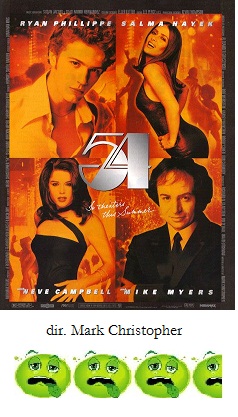 What a depressing waste of an opportunity. 54 purports to give us an insider's look into legendary nightclub Studio 54, that bastion of excess and disco from the 1970s.The club was full of glitz, glamour, drugs, celebrities and sex and a filmed record of those events was just aching to be made; however, Writer/Director Mark Christopher botched this assignment big-time.

54 suffers from an acute case of Post-Titanicitis Syndrome, a disease that occurs in a film that takes place in a real place or during a real historic event: Take said event, dumb it down for the masses with a completely fictional love story about people who never really existed, and voila!, instant movie. Titanic at least had the good graces to star Kate Winslet and Leonardo diCaprio, two performers who could actually act, make an audience care about their (fictional) fates and successfully sell the material. For an example of another late casualty of this illness, see, or better yet, don't see Pearl Harbor. 54, however, gives us the limited thespian talents of Ryan Philippe and Neve Campbell. “A step down” in ability is putting it mildly.

Anyway, Philippe stars as a young, New Jersey kid who dreams of one day going to Studio 54; because, after all, that was THE place to be seen in New York City circa 1978. He is immediately spotted by club owner Steve Rubell (played by Mike Myers) and, because this is a fantasy, is hired as one of the many shirtless, bohunk bartenders.

The rest of the movie basically involves a thoroughly dull romance between Philippe and Neve Campbell, who plays a (fictional) famous soap-opera star. There are a couple of minor, real life events sprinkled throughout 54, such as Rubell's legal issues involving embezzlement and tax evasion, all of which led to Studio 54's demise; but those kinds of factoids are very few and far between.

See what I mean? Every major celebrity of the day went to Studio 54 at one time or another, and there are obviously scads of juicy, untold stories involving all sorts of  dirt and decadence; however, 54 the movie chooses to ignore these realities and only tries to involve the audience with this tiresome romance. There is also plenty of heavy-handed moralizing about the excesses of the party lifestyle and the like, but it has all of the skill and nuance of an after-school special.

Needless to say, Philippe and Campbell are just this side of atrocious. Campbell does her trademark, stop-and-start, Neve speaking-pattern thing, as if this was simply another Scream audition, and Philippe does his best impression of a potted plant, albeit a very blonde and muscular one. Also giving wretched performances are Salma Hayek, Sherry Stringfield, Breckin Myer and Sela Ward; although, to be fair, the screenplay gives them paper-thin characters with nothing to do. Only Mike Myers gives a performance worth mentioning, and it's quite a good one; it could have been Oscar-nomination material had the movie it was trapped in not been such a washout.

If you want to get the skinny on what really happened at Studio 54, it would be more advisable to haunt “E! True Hollywood Stories” on cable. 54 offers nothing remotely involving or entertaining. It lacks both balls and bite, something the club itself had in abundance.