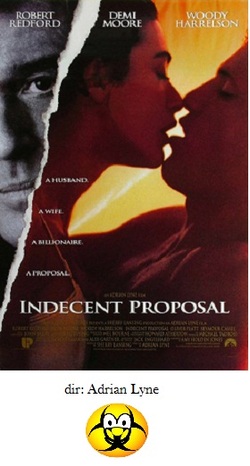 When I saw Indecent Proposal during it's initial run in 1993, I stormed out of the auditorium 3/4 of the way through utterly pissed off. It was only the second time I had ever walked out of a movie (Navy SEALs was the first). Why was I pissed off? Because the characters that Demi Moore and Woody Harrelson played were so unbelievably stupid as to defy belief.

The plot should be familiar.  A young couple, Moore and Harrelson, are going bankrupt.  So, to avoid foreclosure on their dream home they borrow $5,000 and hit Las Vegas to strike it rich. Enter suave millionaire Robert Redford who is so smitten with Moore that he offers them a million dollars to spend one night with her. They accept. The house is saved.

Here is where I became infuriated. After the deed is done, the stupid couple can't just let it go and get on with their newly wealthy lives.  They fight and scream and yell etc. etc. etc. about the moral implications. Harrelson becomes jealous that Moore actually liked doing it with Redford, and Moore, although she did like it, becomes more and more resentful being driven right into Redford's arms. Granted, I had to have someone else fill me in on how this piece of garbage ended, because I wasn't about to go through it again.

My problem? They now have A MILLION DOLLARS! Their dreams can come true! All of their worries are over!!!!!! Why can't they just get over it? Why do they have to be so dumb and ruin a good thing? Their undying love must not be that damn strong. I just quit caring about these morons and what would happen to them that I just secretly wished them a lifetime of misery and despair for thinking that I should care about their problems. I just can't stress it enough: YOU NOW HAVE A MILLION DOLLARS!!! GET OVER IT!!!!

N    ow that I've vented my spleen, I can go on. This flick sparked national news coverage and polls where taken across the country of women. Would they sleep with someone for a million dollars? Overwhelmingly, the answer was "No."  I say to all of them "You're lying!". It's easy to say "no" but honestly, if Robert Redford was standing there with a table piled with cash, most women would be naked in a millisecond. Hell, for a million, there'd be whole lot of men willing to go the distance.  If the guy looked like Ernest Borgnine, that would be another thing entirely.  But it's Robert Redford.  Please spare me the righteous indignation.

All parties considered, Moore, Harrelson, Redford and director Adrian Lyne ("Flashdance", "9 1/2 Weeks", "Fatal Attraction") should all be subjected to partial lobotomies for foisting this turd on the public. Unbelievably, this film was a huge hit with the moviegoers.  Like I always say "Never underestimate the bad taste of the general public". Why else could films like this and crapola like Jungle2Jungle make money? Somebody needs to do something quick.