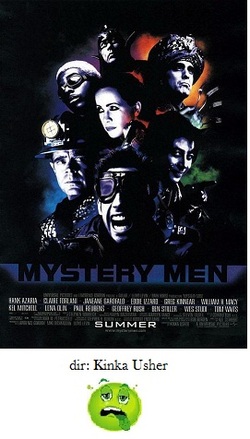 The problems with Mystery Men may not be all that obvious or apparent, but they are there nonetheless. If you strip away the hip casting, the candy-colored sets, and a few witty one-liners and sight gags, you will see that there is essentially no script or narrative to anchor it all down. The movie is sort of like a pinata, fun for a short while, but it gets old real fast...especially after it beaten to death.

The titular characters are a group of would-be superheroes that have less-than-super powers. They include Mr. Furious (Ben Stiller) who gets really, really mad; the Shoveler (William H. Macy), who wears a mining outfit and, well, wields a mean shovel; the Blue Raja (Hank Azaria), who hurls spoons and forks at enemies; the Bowler (Janeane Garofalo), who slings a bowling ball that contains the skull of her dead father. Also there are the Spleen, whose power is that of incapacitating flatulence, and Invisible Boy, who is only invisible if no one is looking.

The plot, what there is of one, is about how the only real superhero in Champion City, Captain Amazing (Greg Kinnear), gets kidnapped by archvillain Casanova Frankenstein (Geoffrey Rush), and the attempts by the lower superheroes to rescue him. That's pretty much it. There are really just a couple of scenes of actual story surrounded by endless diversions, that, although a few of them are cute, don't really enhance. They merely punctuate what an amazing satire Mystery Men could have been. And any movie that completely wastes the talents of Tom Waits loses several cool points.

The character of Casanova Frankenstein is easily the weakest point of an already weak story. Why? Well, he doesn't do much. As portrayed by a grossly miscast Rush, Frankentein merely simpers and rolls his eyes menacingly, but mainly he sits in his castle, torments the captive Captain Amazing and mourns the death of disco. The polyester 70s are his schtick, see. He wears leisure suits and has, as his cronies, the Disco Boys. Of course he has some diabolical plan to take over Champion City, but whatever . All of these last ditch plot points are too chaotic and garbled to make any sense of or instill any caring.

Overall the performances aren't bad. Coming off the best are Garofalo, who amuses by having "arguments" with her father's skull; and Azaria, who tries his darndest to explain why he names himself after a blue Hindu even though he speaks with a fey, British accent and wears green. Stiller and Macy are adequate but have done better work in countless other flicks. Waits, who is a tinkerer who invents non-lethal weapons, and Paul Reubens (aka "Pee Wee" Herman) as the Spleen are given next to nothing to do. And Rush, as I said, is pretty wretched.

I know that some viewers will greatly enjoy Mystery Men, and may defend it by saying it is just a harmless, funny movie. I have nothing against funny movies, but I do have a problem with a film that pretends to be something it definitely fails at being. In this case, a clever satire of the Batman movies and the like.  Director Kinka Usher just doesn't seem to have any reign on the chaos that unfolds on screen. Material like this needs a much surer and experienced hand to control all of the elements and bring them together. The glitz and special effects engulf this film entirely.

Mystery Men isn't a horrible movie, and I can think of many worse ways to kill two hours. But with all of the talent involved, you expect....no...demand comic greatness. Not a film that you merely shrug and say "It was kind of cute."