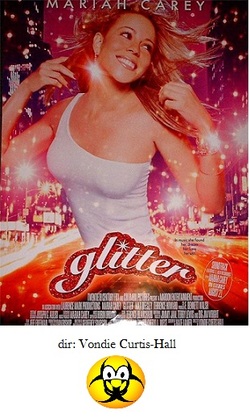 In the category of worthless, ego-stroking vanity projects, Glitter reigns supreme.  Well, at least it's tops at something.  It's also a crass ripoff of A Star is Born, except in this case, a star was almost (justifiably) extinguished.

We follow the rise of Billie Frank who, at the beginning of the movie, is dropped off at an orphanage with her pet cat.  And because young Billie's racial origins are of utmost importance to all concerned, the first thing the other orphans ask her is if she's black or white.  "I'm mixed," is her reply, so I suppose we have to "ooh" and "ah" about this fact as if it were just so shocking, or that we can look at Billie and go, "Poor thing.  Caught between two worlds."

Anyway, this tot grows up to be Mariah Carey, and gives Neil Diamond in The Jazz Singer a run for his money for the title of worst film debut by a famous pop singer.  How bad is Mariah Carey?  Well, let's put it this way- never has a movie been entirely about, or featured, a single, central character who is given as little to do or say as Carey is given here.  It's clear that Director Curtis-Hall, and probably everyone associated with Glitter were very aware of her very limited acting range that entire scenes go by with Carey standing around while other characters talk to each other about her life, her career, her future.  Yes, the movie is about her, but it barely involves her.  She just watches the other actors recite the tired dialogue, only interrupting for the occasional, "Yeah", "Uh-huh", "Right" or, better yet, "Bye."  She is given exactly one scene where she is required to string more than two sentences together at a time, but the less said about that the better.

The rest of the movie follows A Star is Born virtually scene for scene, with Max Beesley playing the musician who "discovers" her and shepherds her career to fruition, only to become upstaged by her and dying in a fit of jealousy. All of which sets up for the predictable emotional moment when Carey, now performing in a stadium, belts out a tune to him that's supposed to bring the audience to tears but only serves as a marking point that yes, thank God, the movie is almost over.

But Glitter isn't content with just this one tearjerking scene, so it piles on another with Carey, still decked out in her evening gown concert-wear and riding in a giant limousine, is driven to the ramshackle hut in the middle of nowheresville to reconcile with the mother who sent her off to the orphanage in the first place.  Watching Carey trying to traverse the hill and dirt in her gown and high heels is just the perfect hilarious send off for such a piece of junk as this.

Yes, Glitter was a cataclysmic flop both at the box-office and with critics and became somewhat of a punchline for many months.  Carey did herself no favors by claiming that Glitter failed at the box-office because it had the unfortunate timing of being released only 10 days after the 9/11 World Trade Center attacks.  But, Honey, Glitter could've been the only film in release from then until the end of the year and it still would've been a bomb.

Mariah Carey did acquit herself quite well in 2009 with her natural and effective supporting role in Precious.  No matter, she'll be trying to live this one down until the day she dies.