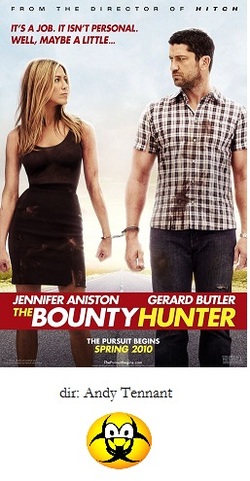 What was the single most miserable film-going experience of 2010?  Well, there were lots to choose from (Grown Ups, Jonah Hex, The Last Airbender), but my vote goes to the irritating, vacuous and painful so-called romantic comedy The Bounty Hunter.

There was a time, which feels so long ago, where I actually liked Jennifer Aniston.  She was an endearing presence on Friends (although I liked her before that when she was a cast member in the failed sketch comedy show The Edge) and she showed some real acting chops in The Good Girl.  But somewhere along the way something happened.  Whether it was because of bad advice from her agent or friends but she decided to cast her film career lot with a nearly unbroken stream of brain-dead comedies that only served to taint her reputation.  Now, whenever I see her name in the credits I run screaming in the other direction (same holds true for Jennifer Lopez, Sarah Jessica Harper, Kate Hudson and Katherine Heigl).  Case in point, the very predictable and very tired The Bounty Hunter.

The film also stars Gerard Butler (whose career is also in the toilet) as the titular bounty hunter who’s just received his next assignment.  The target this time is Aniston, but guess what?  She’s his ex-wife.  Isn’t that a gas?  Bet you can just feel the laugh riot bubbling right up.  So, yes, he captures her, they bicker, she escapes, she’s caught, they fight, they bicker some more, she handcuffs him to a bed, he locks her in the trunk of his car, hilarity does not ensue.  To add clichéd insult to an already injurious piece of junk, there is also a separate group of baddies on hand whose sole purpose seems to be to drive these two dimbulbs into each others’ arms so they can, you know, work together and save the day.  Believe me when I say that even after viewing minute one of this movie you will be able to accurately guess every single thing that’s going to happen in the many long, long minutes that follow.

Films like this act like intelligence vampires; you can actually feel the brain cells dying with every moronic scene, every line of empty dialogue.  There is nothing in The Bounty Hunter that hasn’t been seen a million times before and will undoubtedly be seen a million times in the future.  For nearly two hours it simply twitches on the screen, failing to achieve any lifelike qualities.

The Bounty Hunter doesn’t even try, and that’s the most depressing, soul-deadening thing about it.