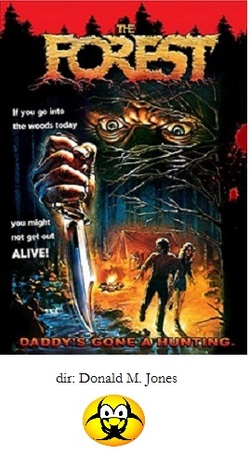 Don't let the nifty poster art for The Forest fool you. More money was spent on that than on the actual making of the movie.

Again, campers should be wary, as they are likely to be slaughtered by a cannibalistic madman in the woods.  As protagonists, we are given two thoroughly unlikeable couples as they make plans for a fun filled weekend of camping and the like; unfortunately, they choose as their destination the killing grounds of the cannibal.

The film spends most of its time spinning its wheels providing the audience with endless scenes of 'character development' with the four nimrods, interspered with random scenes of various no name victims as they are stalked and hacked in the forest.  The acting by all is strictly bargain basement and the death scenes are weak and dull.  All of this dreck would be bad enough to probably warrant inclusion on any 'worst of' list, but I haven't revealed the film's truly nutty twist that guarantees The Forest would most likely top any such list..

We get a little background on the killer cannibal; you see, he was just your ordinary average Joe, but when he found his wife having sex with another man he murdered them both and took his two kids into the woods.  Sadly, the kids died as well.  But fear not, the ghosts of the children appear periodically to warn potential victims of Daddy's impending wrath.  The cute little tow-headed spirits befriend the two leading ladies and ,with the help of the ghost of their dead mother, they are able to defeat Daddy.

This much can be said, the use of the ghosts was unexpected; however, it's the sort of out of left field twist that makes the viewer shake his head while making 'wagga wagga wagga' noises.  All of this nonsense transforms The Forest from being an ordinary Z-grade slasher movie into a bizarre exercise in nuttiness.  Astoundingly, director Donald M. Jones survived to work again, but this remains his highest profile film to date.