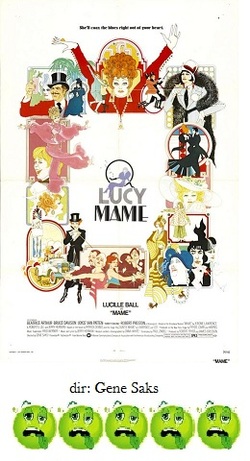 We all love Lucy, but even the most rabid Lucy fan will need to have superhuman endurance to be able to wade through Mame, a stodgy, lumbering dinosaur of a musical that is made all the more unbearable by starring the miscast, over-the-hill Lucille Ball in the title role.  Since Ball sunk a huge chunk of her personal fortune to get Mame made, no one was going to suggest that maybe someone else should play the lead.

Mame is the musical adaptation of both the beloved Patrick Dennis novel, Auntie Mame, and the marvelous 1958 film starring Rosalind Russell, about the kooky free spirit who raises her nephew from small boy to adulthood.  Because of this, the character of Mame must convincingly age through the decades, and Ball was already far too old to pull this off.  Sure, every single close-up of Ball’s face seems to be filmed through a lens coated in Vaseline (the better to conceal wrinkles with), she can’t pull it off.  She may have been wiser to simply do a straight-up remake of the 1958 film instead of a musical that would, you know, require singing and dancing.  By this stage in her life, age 63, Ball already had the deep rasp of a three-pack-a-day smoker, and every time she sings it sounds like a frog getting pounded with a hammer.  Before being a comedic superstar, she had been a song and dance chorus girl, but that was many, many, many years prior.  Also on hand to slaughter the soundtrack are Bea Arthur, as Ball’s bestie, and Kirby Furlong, the truly obnoxious and untalented tyke who was somehow cast as the nephew as a youngster.  Furlong is truly awful and it’s unsurprising his career went nowhere.

Apart from the bad singing, there is the bad dancing.  Every other member of the cast seems game to break out with some real energy, but because dear Lucy could do little more than shuffle about, she becomes more like a spectator than a participant.  During one scene set in a department store, Lucy wears roller skates throughout the store and appears petrified that she may never be able to stop. This also happens to be where she happens upon Robert Preston, the debonair, southern millionaire she will eventually marry; then he dies while they are travelling the world for years (we not only know that time has passed due to the fact that Kirby grows up to be Bruce Davison, but we also know because Ball’s hair color changes from scene to scene), and leaves her a wealthy widow.

Another issue with Mame was with its supremely bad timing.  By the time of its release in 1974, the big Hollywood musicals represented a bygone era that was no longer in vogue.  On the stage and screen were the more hip, youth-oriented rock operas of Hair, Godspell, Jesus Christ Superstar, amongst others, and such Sunday matinee musicals aimed for blue-haired, old ladies were guaranteed to turn into financial sinkholes.  All Ball had to do was take a look at Lost Horizon, the debacle from 1973 to get an idea of how well Mame was going to fly at the cinemas (i.e. it was assured to be D.O.A.).  Director Peter Bogdanovich didn’t heed this warning either and saw his own paean to Old Hollywood, At Long Last Love, also get crucified both critically and financially.

Mame was a perfect storm of awful: a star who had no business singing and dancing, a plethora of equally bad co-stars, corny, old-fashioned songs, a story that moved at a slug’s place (when it wasn’t eliminating the more interesting and amusing moments from the book and original film), and a musical style no one cared about anymore.  It’s no wonder Mame sank like a stone, taking down almost its entire $12 million budget. After this, Ball never appeared in another feature film.  Blessing? We may never know.