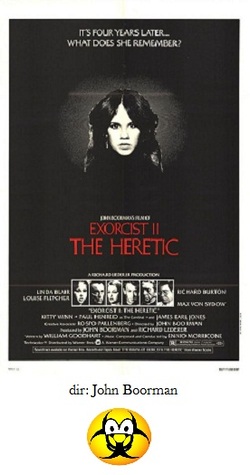 Some movies should come with their own specialized warning label, such as "Should not be viewed before driving or operating heavy machinery" or "Recommended to be viewed in 15 minute increments only." Such viewer advisories could save many a sane brain that tries to slog through the abominable Exorcist II: The Heretic.

In a word, this sequel to the famous 1973 original is "ungodly", and not in a good way. It's so bad in so many ways that you almost feel sorry for it. Everyone involved, from stars Linda Blair, Richard Burton, Louise Fletcher, Kitty Winn, Max Von Sydow, and James Earl Jones to writer William Goodhart and director John Boorman, must have seriously been possessed by something to create such a truly wretched piece of work as this.

The incomprehensible story begins few years after the original film.  Regan McNeil (Blair) is seeing a shrink (Fletcher) to try and remember events of "that night". A priest, Father Lamont (Burton) is dispatched to solve the mystery of how and why Father Merrin (Von Sydow) died. To get through Regan's amnesia, Fletcher uses a "sync machine" (it's a little box with little lights that flash in your eyes causing you to remember things). Anyway, the machine flashes at Regan and the doctor and soon we are greeted with footage from the original film. Lamont is convinced that a demon is trying to take Regan's soul, so to give him advice, he travels to Africa to find Kokumo (not to be confused with the song "Kokomo" by the Beach Boys), a young boy who was possessed by the demon Pazuzu and now has grown up to be an entomologist (Jones), who likes to study the communication and flight paths of locusts.

Make sense so far? No? Oh, but it gets worse. Regan begins to have flashbacks, and with the help of Lamont, they travel back to the original house from the first film where the are beseiged by a plague of locusts, a demonic Regan double, and earthquakes within the house. Sharon, the nanny (Winn), burns herself up, and the Doc is left sadder, but wiser, when it comes to trying to care for demonically possessed patients.

This whole narrative thread is excruciating to have to sit through. Not a lick of sense or logic was put into the screenplay.  Half-digested ideas and attempts at the psuedo-psychological are chewed up and spit out without explanation or rationality. The dialogue is hilariously bad too, and since the lines are being uttered by the always awful Linda Blair and seasoned hams  Richard Burton and Louise Fletcher (who practically dares the Academy to rescind her Oscar two years previously), it's no wonder. While riding in a plane to recreate the locust swarm's flightpath, Burton states "I traveled this route before, on the wings of a demon". Of course he stretches the word "demon" into "deeeeemon", to make sure we understand it's significance. Or how about "She has evolved to resist the brushing of the wings!" Or how about while Blair and Burton are "syncing" with the machine they utter "Kokumo", oh, about 100 times. One scene has Blair in the Fletcher's waiting room where she asks a little girl what is wrong, the girl replies that she is autistic and then asks Blair what's wrong with her, "Oh, I was possessed by a demon. But it's okay, I'm alright now."

I almost forgot to mention the horrifying scene where Blair tap-dances to "Lullaby of Broadway". I could go on and on about why this flick is a failure, but history speaks for itself. The film was originally released and was promptly laughed off the screen. It was then pulled, and reedited and rereleased and bombed again. John Boorman is normally a quality director (Excalibur, Hope and Glory), but a demon must have been involved in his work here.

The Exorcist III followed in 1990, and although it's not very good either, it hardly comes close to the travesty of Exorcist II: The Heretic.  If you watch the ending credits you'll see one for "Special Locust Photography". This in itself is enough to illicit peals of laughter.