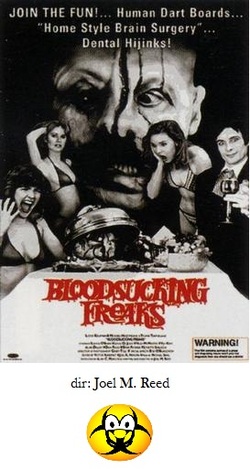 I'm often asked, what is the single worst movie I've ever had the displeasure of seeing, the most worthless piece of garbage ever committed to celluloid?  Here's the answer: Bloodsucking Freaks.

If you are looking for a repugnant cavalcade of atrocities without such pesky things as plot, competent acting, writing or directing, then this is the movie for you.  It's just a non-stop stream of torture, dismemberment, disfigurement and debasement of women.  Nothing else.

The only real story here is that Bloodsucking Freaks involves the goings-on at 'Sardu's Incredible Torture Show.'  Master Sardu simply parades woman after woman on a stage, and with the help of his dwarf sidekick, does every manner of violent act on them for a theatre of paying customers.  You see, the audience thinks all of this is fake, a modern day Grand Guignol if you will, but it's all real.

The litany of misogynistic violence includes (but is not limited to):  forced tooth extractions, gouged out eyes, sawed off feet and fingers, bare buttocks used as dart boards, beheadings (with the added insult of the dwarf using the decapitated head for oral sex), electrocutions, cannibalism, heads crushed in vises, and, in one case, a woman's head is drilled into, a plastic tube is inserted and the brains are sucked out, hence the title.  And there is much more.  I don't usually side with protest groups when it comes to outrages against artistic expression, but in this case, I make an exception.

If there is one movie out there that has no reason to exist and should be eradicated for the good of humanity, Bloodsucking Freaks is it.