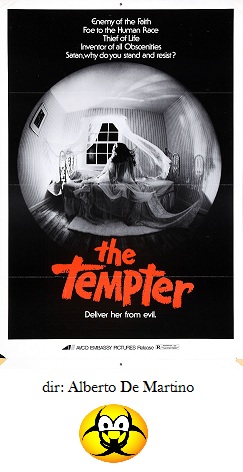 After the success of The Exorcist in 1973, theaters became flooded with cheapo knockoffs hoping to cash in on the craze surrounding movies dealing with demonic possession.  Most of these movies didn't care about being scary; they were pure exploitation, only existing to see how far they could push the limits into the vile and nauseating.  The worst of the lot is easily the bottom-feeding, Italian The Tempter, also known as The Antichrist.

The possession victim this time is Carla Gravina, a paraplegic who still suffers from depression following the death of her mother.  In order to combat this melancholy she undergoes hypnosis and finds out she is the reincarnation of a satanic priestess and, naturally, once this is revealed, she begins to suffer some form of possession.  This all may sound all well and good on paper, but believe me when I say that the script is so badly-written and tortured that it is nearly impossible to follow.  Also problematic is the performance of Gravina, who is all wide-eyed and hysterical from frame one that it's as if she is possessed (by the dark lord of bad acting, if nothing else) already.

Our first bit of nastiness that should give you a clear idea of the taste level of The Tempter is the scene where Gravina is thrashing around on her bed reliving the ritual when her priestess past-self is indoctrinated to satan.  First, a masked priest feeds her the freshly ripped-off head of a toad, which she chews on; next, she then has her face is pushed onto the back end of a goat where she licks out it's anus.

Anyway, Gravina eventually goes full-on demon where she finds a bunch of incredibly stupid men to seduce and then murder.  She also has many scenes that show her levitating in the air (still in a wheelchair) and zipping around her home and other moments where she vomits up green slime and forces unwitting victims to eat it.  So, yeah, there's your expected exorcism with all of the typical cliches in order so that they can be ticked off one by one.

There just isn't a single thing of value in The Tempter.  The acting, not just Gravina, but the entire cast, is atrocious, the pace is endlessly slow, the images are only there to give movie-goers the dry heaves, the direction is strictly amateur hour and someone should have done the world a favor and set fire to the script.  There are no scares, no originality and no reason to even exist.  It makes dreck like Beyond the Door from the same year feel like something from Alfred Hitchcock.

It's about as worthless as they come.