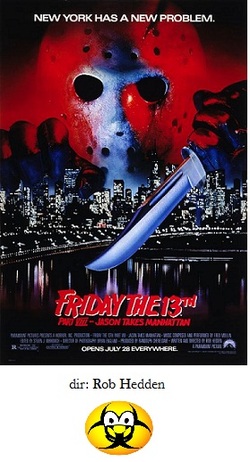 This entry in the endless series begun in 1980 is without a doubt the absolute pits of the slasher genre.  It's the worst acted, most ineptly filmed, most stupifyingly plotted of them all.  In that sense, this movie is king.  It's the most endless 100 minutes ever put to celluloid; no, really, a double feature of Heaven's Gate and Cleopatra would feel shorter.

And, no, Jason doesn't really 'take' Manhattan because Jason never even gets to Manhattan until the final 15 minutes, until then it could easily be called Friday the 13th Part VIII: Jason Takes the Love Boat.

The plot (ha ha ha!) follows a group of graduating high school seniors who've rented an ocean liner, or large party yacht or whatever, and plan on boating to the Big Apple.  Never mind that the boat begins its journey at Crystal Lake (which suddenly looks as expansive as Lake Superior) which is, you know, a lake! and somehow finds its destination.  So, the bulk of the movie has Jason skulking about the ship and dispatching with one teen after another in predictable and boring fashion until the ship docks in NYC (we get that we're in the big city now because some extras dressed as the homeless and there a few minor chase scenes down alleys and sewers).

Not content at being just a bad slasher, Jason Takes Manhattan also slathers on a thick layer of bizarre childhood psychosis nonsense which is depicted as a floating hallucination of Jason as a young boy, which appear from the ether to help 'final girl' Jensen Daggett (who?) and defeat the evil adult Jason once and for all.

Writer/director Rob Hedden deserves all of the blame here and was deservedly consigned to 'Movie Jail' for the rest of his career.  You almost have to try to make a movie this bad, it just doesn't make any sense for this to have happened purely by accident, no matter how talentless the creative forces may have been.  There's just no way around it, Friday the 13th Part VIII: Jason Takes Manhattan is just about as awful as it can get.