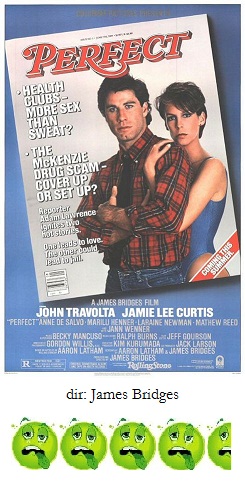 When adapting material for the screen, there are many good sources to look to. Novels are a good bet. Plays are also decent choices. But articles about health clubs in Rolling Stone magazine? Is that turkey I smell? Well, someone thought this was a good idea and did just that. The result: One of the biggest box office bombs of 1985.

Perfect tells the story of hot-shot Rolling Stone writer Adam Lawrence, played by John Travolta, who decides that his new article should be about health clubs and how they are the singles bars of the 80s. He hits upon a popular L.A. club called "The Sports Connection", that he lovingly dubs "The Sports Erection." There he meets a few of the patrons. First is Marilu Henner, a bubbly dimbulb who does any exercise that makes her breasts look bigger; Saturday Night Live's Laraine Newman, whom other patrons affectionately call "the most used piece of equipment in the gym"; and, finally, a very jiggly Jamie Lee Curtis, as a successful aerobics instructor.

Travolta immediately gets the hots for Curtis and wants desperately to interview her, but she continuously declines, having before been burned by a journalist who exposed her relationship with her swimming coach when she was training for the Olympics. This makes him want her all the more.

After he scores in bed with Curtis, he also scores the interview. Curtis reveals her sad story, but when she notices he's tape recording her, she throws him out of her car and says "You're a sphincter muscle!" She uses this insult several times before the movie ends.

Travolta decides to scrap the article, but the Rolling Stone editor, played by real-life Rolling Stone editor Jann Wenner (he shouldn't quit his day job), goes over his head and destroys everyone's reputation in the process. Oh pooh, I guess everyone will know what vain people they really are!
Travolta apologizes, Curtis eventually forgives, and everyone gets together for a grand finale aerobics workout!

Perfect is very bad in every department. Travolta pretty much destroyed his career with this lame performance, being resigned to the Look Who's Talking movies and straight-to-video cheapies until his rescue by Quentin Tarantino. There is a lengthy workout sequence where Travolta shows his moves with a very stuffed looking pair of shorts that never misses a chance to be thrust into the camera. Curtis is given a one-dimensional role and gives a one-dimensional performance. Only Newman has a character that has any depth or delivers a good performance; sadly, it was trapped in this dud. And did anyone really think that audiences were that interested in the goings-on in health clubs, anyway?

If all of that weren't bad enough, the final workout sequence has the entire cast individually grinning and mugging for the camera as their credits are superimposed over their bods.

Perfect is smug self-indulgence of the highest order. You'll reach for the stop button faster than you can say "sphincter muscle."