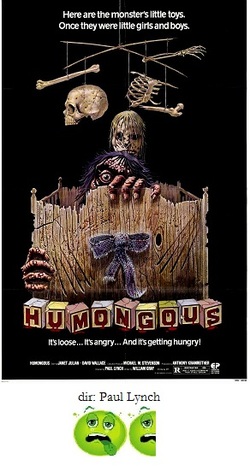 In the early 80's, it seemed like every week their were several new and exciting dead-teenager flicks. You know the kind, a group of oversexed kids find themselves at the mercy of whatever mad slasher is in the vicinity. Very few, if any, were any good. Just watch Graduation Day, Final Exam, Fatal Games, Midnight, Madman, New Year's Evil, Silent Night, Deadly Night or any other sub-par Friday the 13th clone if you don't believe me.  The absurdly titled Humongous is more of the same, except this time, the kids get stranded on an island and are dispatched by a giant man-beast.

Anyway, our story begins many years in the past. While at her island resort home, a rich woman is raped by one of her party guests. Strangely, the director chooses to film the rape from the point-of-view of the victim, so we as an audience get the lovely opportunity of watching this guy give it to us good, at least until her pack of pet German shepherds tear him to pieces.

Flash-forward to present day (circa 1982) a group of teens are packing up the family yacht to take a nice spring-break excursion. The teens are pretty much your basic generic "movie teen", their personalities can be summed up into one high-concept description, like the stud-hero Eric (David Wallace), the nice-girl Janet (Sandy Ralston), the nerd Carla (Janit Baldwin), the sexbomb Donna (Joy Boushel) and the insufferable clod Nick (John Wildman).

And now a word about the stereotype of the insufferable clod. Why is it that in every group of teens in these movies, one guy is always so mean-spirited, cruel, foolish and intolerable? Why is anyone friends with guys like that? Why do they put up with it, even when he endangers their lives and threatens them with bodily harm? People like that can only get along with people who are the same.

Anyway, while the kids are yachting they come across a stranded boatman and pick him up. To finally get the plot going, Nick gets pissed off at something and decides to shanghai the yacht. So, now we get about three hours worth of film where the other passengers say every variation of "Watch out Nick!" known to man. "Look out!", "Nick, watch out!", "Stop Nick!", "Watch out Nick, Look out!". So, naturally he wrecks the yacht on an island, and naturally this would be the same island from earlier in the movie, only several decades later, and naturally the deformed son of the raped woman is running loose. And boy, is he Humongous!

Humongous-man spends the rest of the flick chasing the teens and slaughtering them, but instead of the various sharp weapons that are popular with slasher films, Humongous uses his brute strength to snap necks and break spines with gleeful abandon.  By the end, good-girl Janet is the only one left alive (couldn't guess she would be the sole survivor now, could we?) and goes mano-a-mano with the beast, eventually torching him and saving the day.

Humongous is not the worst of its kind by far, but there are the usual pitfalls that it can't avoid; One: the cast is virtually talent-free. No one can act.  Even Donna can't seem to express much emotion, even when she conveniently peels off her blouse and presses her bare boobies onto the injured boatman's body to prevent hypothermia; Two: almost the entire last half of the movie takes place in darkness. Not just shade and shadow, but complete darkness.  Long stretches of action are completely enveloped in black. Needless to say, it's hard to tell what's going on much of the time.

If you are looking for quality entertainment, or even a good scarefest, Humongous won't deliver the goods. But you might want to check it out, if only for a thankfully needed diversion from the usual Killer-in-the-Summer-Camp swill.