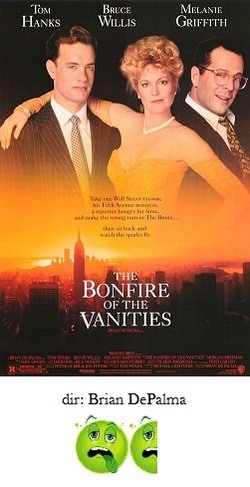 Having never read Tom Wolfe's original novel, I can only go my hearsay as to the movie adaptation's complete disregard for its source material.  It's maybe for this reason why I don't think the movie to be the total travesty which most everyone else claims.  There are some very good elements here, but for every one that works, there is one or more that doesn't.

The Bonfire of the Vanities is supposed to be a blackly satirical view of a post-1980s New York that is awash in corruption, greed, racial tensions and class warfare.  Tom Hanks stars as the iconic Sherman McCoy, a wealthy, blueblooded bond salesman who lives in a million dollar apartment with his brittle wife Kim Catrall; even though he seems to have everything, he carries on an affiar with wealthy southern belle Melanie Griffith.  The plot kicks into gear when Hanks and Griffith accidentally drive into The Bronx one evening.  When a couple of African-American teenagers approaches their car, they panic and wind up running down one of them during their mad escape.  This incident sparks off a firestorm of controversy within the Big Apple as political predators from all sides try to capitalize on it, including a lush journalist played by Bruce Willis.  Sounds good, doesn't it?

Well, some of it is.  It becomes clear, however, that such things as subtely, nuance, subtext or, well, real intellectual bite are sacrificed for the sake of being simplistic and hamfisted in order to make sure its ideas or themes are stated in the most obvious ways possible.  The Bonfire of the Vanities just doesn't have any respect for the intelligence of its audience.

According to fans of the novel, even if you were to go out of your way to find the least appropriate actors to fill these roles, you couldn't come up with worse examples.  Hanks is hardly who you'd think of when describing the all-American, high-society "Master of the Universe," Griffith is hardly anyone's idea of a southern sexpot with her now-you-hear-it, now-you-don't accent, and Willis, cast during his full blown smirky "aren't I the coolest cat in the room" phase, doesn't bring in the seedy, unlikability his role ought to call for.  Despite this, Hanks's performance is quite good, and it's almost reason enough to watch The Bonfire of the Vanities, and Catrall seems to be the only truly perfect fit amongst any of the characters and is quite amusing in the process.  F. Murray Abraham chews up the screen as the Jewish D.A. wanting to prosecute a rich, white defendant in order to get the minority vote, John Hancock is an Al Sharpton-influenced Reverend, and despite the fact that this role is already a caricature, Hancock does it no favors by essentially throttling it until it dies, and Morgan Freeman is the judge who presides over Hanks's trial and whose "meant-to-be inspirational" final speech once again bludgeons the movie's themes, and the audience, into submission.

Without anything of real substance or cleverness in the story of The Bonfire of the Vanities, about the only thing to hold onto is the directorial style by Brian DePalma.  The movie really does look great and DePalma uses great ingenuity in giving New York City a different kind of gleam, one that is shiny on the surface but rotten to the core.  The virtuouso camerawork and the eye-catching set design and costumes also go a long way into making the movie easy enough to watch without much suffering.

Some novels were just not meant to be filmed, and it would appear that Tom Wolfe's The Bonfire of the Vanities was one such example.  They kept the broad strokes but not the balance of the themes, they changed the characters to reflect the stars and not the other way around and they just let pandemonium ensue on the set.  Instead of modern day classic, we got a classic miscalculation.