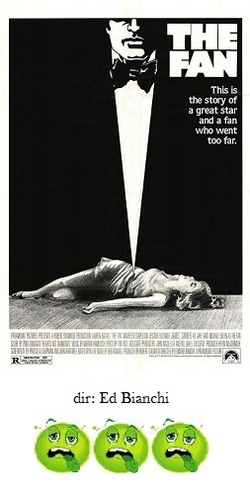 How desperate was Lauren Bacall to have agreed to star in, and in turn, completely embarass herself in the process,with The Fan? Now, don't get this lame-o thriller confused with the other lame-o thriller of the same name with Wesley Snipes and Robert DeNiro. Either one you decide to rent, you'll be sorry.

Bacall plays an aging actress who is in the process of starring in a new musical on stage. Bacall's performance here is hardly a stretch; she is essentially just playing herself. The sad part is that she hardly does even that very convincingly. Baby-faced Michael Biehn is the rabid fan who is plaguing Bacall with an endless series of letters, each more bizarre and unhinged than the last. One even speculates about how much he wants to have sex with her. Now let that image sink in for a minute.

Biehn gets pissed off for being consistantly blown off, and then proceeds to attack all of the people close to Bacall; first he slashes secretary Maureen Stapleton's face in a subway tunnel,  then guts her choreographer in a swimming pool (which, when you see the musical finale, you'll agree that someone had to), and kills her maid. All of which culminate into a final attack in the empty auditorium after Bacall's big musical triumph.

Oh, where to start?

Apart from the non-performance by Bacall, the choice of Michael Biehn as the villain was not a good one. Despite wielding a straight-razor and sweating a lot, Biehn is about as menacing as the Snuggle Bear, only less animated. Even the voice-overs of his fan letters hardly enduce any sense of danger, even when he writes/says things like "How'd you like to be f*cked by a meat cleaver?"

James Garner plays Bacall's ex-husband, and scads of screen time is devoted to their on again-off again love/hate relationship. Hmmmm, could this be what we call padding, conveniently disguised as character development? You can't really blame them, otherwise this flick would be about 30 minutes long. But I'm saying that like that would be a bad thing, aren't I?

Now comes the most excruciating thing about The Fan. Not only do we get endless scenes of Bacall practicing for her big performance in the musical, but we actually get to see her perform it on stage. And it is awwwwwful! Full of badly choreographed dancing boys and girls shimmying around singing songs in praise of Bacall. Bacall at one point lounges on a giant bed while warbling "Hot love baby tonight!", and then for the final number she croaks some song about "don't give me diamonds, just give me hearts".  Of course she brings the house down!

Because of his obsession, or maybe because he actually saw Bacall's performance on stage, Biehn eventually finds her and chases her around the auditorium. It would be an understatement to say this is not exciting. The aging Bacall is just too slow in running away, so Biehn has to pretend to have trouble catching her so as to make it somehow appear that she is escaping, so he slows down too. It's sort of a taffy-pull as chase scene. Anyway, Biehn corners Bacall, and somehow, she is able to talk him into an affectionate stupor, whereby she shoves his own knife into his neck.

The last scene has a very dead Biehn sitting in a theatre seat as the camera pulls away to show the rest of the empty seats. Could this have been a portent of what the theatres showing The Fan looked like? Basically empty, with one deadened spectator.