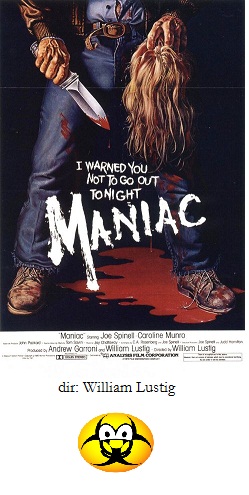 Ick. Even compared to the rest of the "mad-slasher" movies of the early 80's, Maniac stands as one of its most inept and repellent examples. Astonishingly, this movie has a cult following of sorts, which just proves some people (even me) will watch anything.

Maniac is the diseased brainchild of late actor Joe Spinell, a respected (at least until this travesty) character actor who played parts in Taxi Driver, The Godfather and Rocky. Spinell is really the main person to blame for Maniac, after all he not only starred in it, but co-wrote and co-produced it as well.  I'm not sure what the point of Maniac is, exactly. Spinell plays a greasy serial killer who basically slaughters women so he can bring back their scalps to adorn his apartment full of mannequins. That's about it.

The film begins with a young couple on the beach who are summarily butchered. She's stabbed and he's throttled with wire. Next we see Spinell awaking in his apartment the next day muttering to himself. That is what Spinell passes off as a performance; there are endless static shots of him just sitting or walking and talking to himself in an endless nonsensical stream of psychotic blather. Anyway, the newspaper's headline extolls the presence of a 'Maniac' in New York City.

Next Spinell picks up a hooker, takes her up to a motel room, then strangles her. While strangling her he wails and moans like a raving lunatic saying something about "mommy" in the process. He then pulls out a trusty hunting knife and we get a nice, slow, close-up shot of the hooker's forehead being sliced open and her scalp torn from her skull. Yummy. Later in his apartment, he takes the moist scalp and nails it to the head of one of his mannequins, all the while still quietly muttering to himself.

And so it goes.

The movie is just one endless stream of pointless gore without plot or purpose. Spinell claimed to have based Maniac on  The Son of Sam, but except for one scene where he kills a young couple, who've parked in a car to neck, with a shotgun, it's hard to tell where the similarities are. One interesting note though: the man in the car billed as "Disco Boy" is none other than make-up artist extraordinaire Tom Savini (who also provided the goopy effects for this movie). Anway, Spinell jumps on the hood of the car and blows Savini's head apart into about a million spongy, bloody chunks. This is of course filmed in slow motion and at several angles so we don't miss anything.  The only bright spot in this misogynistic swill is the performance of Caroline Munro who plays a photographer Spinell becomes enamored with. She has a nice screen presence and likablity, but she cannot save this dreary piece of snuff.

The single most offensive and vile moment (as if the aforementioned scenes weren't already bad enough) comes with Spinell breaking into the apartment of a nubile fashion model and attacking her. He ties her up in bed and taunts her with a knife while she screams until finally he plunges the knife into her guts and lays on top of her (and the knife) making humping motions, squealing and crying "b*tch" and "you made me do it". Nasty.

The ending has a maniacal Spinell attacking Munro in a cemetery where he has visions of "mommy" bursting from the grave and trying to strangle him. Then he hallucinates that his victims reappear, surrounding him and dismembering his body, with tasty closeups of his arms being chopped off and his head being ripped from his torso. Anyway, the cops find him dead in his bed, was it self-inflicted? Do you care? Didn't think so.

Director William Lustig proves he has zero talent or style, since Maniac his only claim to big-screen fame; his career, following it, has consisted of being the director of the direct to video Maniac Cop franchise.

Maniac has all of the appeal of a bucket of festering vomit. Maybe even less, if that's possible.