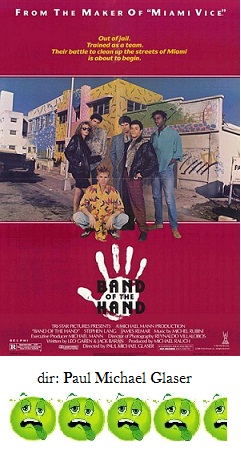 Band of the Hand, a largely (and thankfully) forgotten bit of slick but sleazy mid-'80s youth-centric garbage, delivers a pretty depressing and garbled message: To rise above violence, fight violence with more violence...or maybe it's fight violence with the right kind of sanctioned, positive violence?

During this era, most critics piled on top of the popular teen-slasher films that clogged up movie screens in the 1980s, but at least those movies were honest and up-front about their attitude of extreme violence as entertainment.  Band of the Hand, as well as The New Kids, Dangerously Close, and others, pretended to be above it all and provide a social 'message', but wound up being more odious than any sub-par Friday the 13th that was ever made.

Band of the Hand stars Stephen Lang as some sort of survivalist with a heart who develops a program that will take several juvenile delinquents and try to turn their lives around through self-reliance...or self-esteem....or self-abuse....or whatever.  The youths selected for this program are your typical 80s movie delinquent, all bad-ass atitudes while wearing the latest in Chess King fashions.  The only one with anything resembling a personality is a very strange lad who's been imprisoned for killing his abusive father and is played by John Cameron Mitchell who would go on to create Hedwig and the Angry Inch and direct such other terrific films as Shortbus and Rabbit Hole.  At least he and Lang were able to escape this film and go on to bigger and better things.

Anyway, the first part of Band of the Hand involves the boys being stranded out in the Everglades to learn to live off the land and work together as a team...or a band!  There is lots of bickering and fighting and failed attempts at boar hunting and flailing about in the mud.  Once they've shown they can survive and rely on each other Lang takes them to Miami, buys a rundown house for them all to fix up and live in, and urges them to establish themselves as productive members of the neighborhood.  There is also a pretty sleazy subplot involving Lauren Holly, the girlfriend of one of the 'band,' who becomes involved with drug kingpin James Remar and is turned into a junkie prostitute.  Of course we are asked to sympathize with her even though she was an accomplice to a major drug trafficking attempt that landed her boyfriend in jail in the first place.

Anyway, up 'til now, Band of the Hand resembles only a very dated and innocuous youth picture, but it all quickly turns into a bloodbath as the kids butt heads with Remar and drug-pusher Laurence Fishburne.  So how does Lang decide to teach these recruits about leaving a life of crime and violence?  Well, by arming them to the teeth and engaging in extended gun-battles against the gangsters, of course.  What exactly is the moral here?  Violence is bad when you're on your own, but it's good when it's with a group?  Whatever.  The 'band' wins, Lang dies and the movie ends, but I for one held out little hope that this experience would turn these losers' lives around.

Loathing is about the only emotion one can muster for Band of the Hand.  The technical credits are fine (the promotional materials loudly tout that the movie was produced by Michael Mann during his 'Miami Vice' days) but they serve little purpose.  The only positive thing I can say about Band of the Hand is that some of the songs on the soundtrack are pretty great, but download those and forget the film.