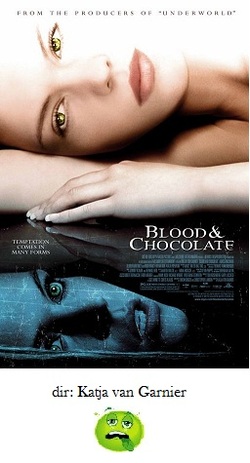 In Hollywood, timing is everything.  Had Blood and Chocolate, a gauzy teen romance about werewolves, been released in the wake of Twilight-mania, it probably would've been a substantial box office hit.  Unfortunately, it came out over a year earlier and died a quick death.  Even though Blood and Chocolate is disposable, silly fluff, for my money it's better than any entry in the Twilight saga.

Based on a novel by Annette Curtis Klause, Blood and Chocolate follows our heroine, Agnes Bruckner, who happens to be a member of an extended race of human/wolf hybrids.  Even though she's betrothed to a member of her own kind, she falls for human Hugh Dancy, a young man who is involved with publishing a graphic novel about this race of human/wolves, which he thinks are only the stuff of legend.  Naturally, this fact does not go over very well with Bruckner's cousin Bryan Dick or the wolf leader Olivier Martinez.

Now, the word 'werewolf' is never mentioned, so those expecting lots of cool special effects of human-to-wolf transformations will be thoroughly disappointed.  You see, when these guys change, their eyes go all yellow, their bodies are surrounded by blurry white light and then, poof!, they are instantly turned into your garden variety wolf.  Yes, it's just as ludicrous as the sparkly vampires in Twilight.

Blood and Chocolate is easy enough to watch and is slickly directed by Katja van Garnier, but the screenplay just drags along slowly, going through the motions of a story of which every plot point is easily anticipated.  Also frustrating is the lack of 'rules' surrounding these creatures.  It seems they can transform at will regardless of whether there is a full moon or not; they even transform during the day.  There are also references to the aging process (are lack thereof) of the wolf-people that is never fully explained, so we're left wondering if they are members of the undead or are just very slow growers.  Silver still seems to be a factor as a way to kill them (again, are they werewolves or not?), and in the single silliest moment of the movie, Bruckner accidently gets pierced by silver but makes her way to a back alley pharmacist in order to get a 'silver antidote.'

There is nothing about Blood and Chocolate that inspires one to solidly recommend it.  It only serves as something that could fill the void for teenagers who are chomping at the bit until the next Twilight movie comes out.  Other than that, take a pass.