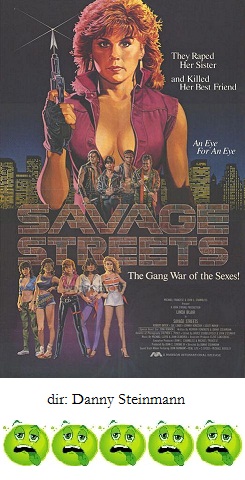 Yet another movie where you'll feel like you need a bath afterwards. Savage Streets lurches awkwardly from repulsive to cheesy to hysterical, until the grand finale where Linda Blair dons a tight black leather outfit and wields a deadly crossbow. Yup, it's that kind of flick.

Savage Streets is a super-lame, cheesecake, revenge flick with Linda Blair as the leader of a group of tough, high-school bad girls. Considering all of the actresses look to be about 25 years-old and are madeup and dressed so tackily they look about 35, the fact that they play high school seniors should give you a clue to this movie's ineptitude. Anyway, Blair is a tough as nails bitch who has a soft spot for her deaf-mute little sister, played by a pre-Troma Linnea Quigley. Since Quigley looks about 20, by this move's logic, her character is supposed to be about 13 or 14.

Anyway, the bad girls are walking the streets of L.A. one night shopping, but after getting a gander at Blair's gigundus chest, bras are not something they think of buying. They do however pass by a pawn-shop window and see that crossbows are on sale with a weekly special on bear-traps. This is the filmmaker's idea of clever foreshadowing.  The villains in this movie are a group of bad-boys called the Scars.  The leader is so tough he wears a razorblade earring and stubs cigarettes out on his palm. During this night on the town the Scars nearly run over the deaf Heather, and after an exchange of come-ons and insults with Brenda and the girls, they drive off.  Later, the girls spot their convertible and take it for a joyride and then dump garbage in it.

At school the next day, Blair and the girls do aerobics and then hit the showers. This is the kind of movie where, even though the main characters are at the lockers and talking while fully clothed, the camera starts the scene in the showers to linger on the naked extras soaping up their giant hooters. And of course, the scene ends with Blair and a cheerleader enmeshed in a very wet girlfight.  While this is happening, Quigley is waiting for her sister alone in the gym  when the Scars show up, and in retaliation for their car, they drag the poor girl into a bathroom and gang-rape her. Yes we get a nice, long, lovely scene of the 4 guys raping a very young deaf girl. We even get her silent scream as the first "thrust" is entered. And to top it off, the leader kicks her in the head until she's in a coma. Needless to say, Big Sis is pissed.

All of this tension escalates until the Scars toss one of her friends off a bridge; whereupon, she finally has had enough. She dons her leather outfit, and uses the aforementioned crossbow and bear traps to get even. This sight is hilarious in and of itself, but Linda Blair plays it with all of the scenery chewing and nostril flaring that goes along with it. She also must have doing some heavy speed, too, because I've never seen anyone's eyes get THAT big and glaring since Marty Feldman.
Our girl Brenda dispatches the baddies; one gets an arrow through the throat, another gets his skull crushed in a bear trap. Until she gets to the Scar leader, where after a long and drawn out chase and battle, douses him with paint and  sets him ablaze. At her friend's gravesite she intones "We did what we had to do!"

Yes, Savage Streets is, at times, gloriously wretched. Blair's performance here makes her work in the women-in-prison movie Chained Heat and the slasher flick Hell Night seem like examples of extreme subtlety.  Also, if boobs are your thing, then this is the movie for you. Not only do we get a shower-full of them, Quigley's are exposed in the rape, Blair has a poignant moment where she glowers in deep thought while taking a bath, her enormous melons floating in the water, Blair also has another cat-fight with the cheerleader where she, naturally, yanks off the girl's tank-top, and probably the most embarrassed looking actress of all is a blond girl whose sole function is to have her tubetop ripped off by the Scars and her boobs molested for the camera.  She doesn't even get a single word of dialogue.

Deplorable is the only word I can come up with as a description, but it is good for a laugh or three.