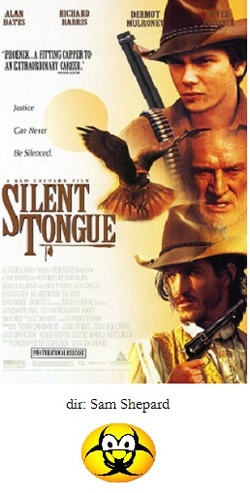 Let's hope Sam Shepard never directs another movie again. Don't get me wrong, Shepard is an award winning playwright and accomplished actor, but when it comes to writing AND directing an original film screenplay, you can't do a whole lot worse. What with the one-two gut punches of Far North and Silent Tongue, his incompetence is overshadowed only by his pretentiousness.

Silent Tongue is a bad and confusing mess of a Western. After Kevin Costner (Dances With Wolves), and Clint Eastwood (Unforgiven) revived the genre, along came Silent Tongue, Even Cowgirls Get the Blues, and Wagons East to shoot it dead between the eyes.

I'll try to explain what the hell this film is about. Here goes! Many years ago a mute Indian woman named Silent Tongue is raped, for some reason she becomes married to Eamon McCree (awful Alan Bates) who owns a traveling medicine show. They have two daughters Awbonnie and Velada. As the film opens, Awbonnie is dead and rotting in the desert and her distraught husband, Talbot Roe (River Phoenix) stands guard over her corpse and hallucinates her resurrection. Prescott Roe (Richard Harris, even more awful than Alan Bates), wants to buy Velada from Eamon, as he did with Awbonnie, to bring Talbot around from insanity. Eamon refuses, Talbot kidnaps Velada, which sets Eamon and his son Reeves (Dermot Mulroney) to track them down. Have you got all that? No?

Essentially that's all there is. With this as the set up, the rest of this stroke-inducer focuses on several looooooong scenes and eeeeeeendless conversations between the two traveling pairs, Prescott and Velada, and Eamon and Reeves, each expousing "the meaning of it all". Boy can I relate. There were times when I masochisticaly wanted to rewatch because I was sure there was something I missed, otherwise, why would I be so confused?

Alas, the confusion falls entirely with Shepard who, apparantly, was so in love with this screenplay that he couldn't bare to rewrite or trim or edit any of his precious dialogue. There are even endless, extraneous scenes involving the travelling medicine show, where dwarfs and acrobats act out some sort of Greek tragedy (I think) that somehow parrallels what is going on amongst the main characters (again, I think). Whatever.

The real loser here is River Phoenix. This one was his last completed film before his death and what a thankless role it was. All he is given to do is to recite confusing dialogue that is supposed to signify his impending madness while reacting to the ghost of his dead wife. He looks very uncomfortable and very unhappy. Who could blame him?

Except for acting roles, not much was heard from the almighty Shepard on the film front. And for that, I say "Hallelujah!"