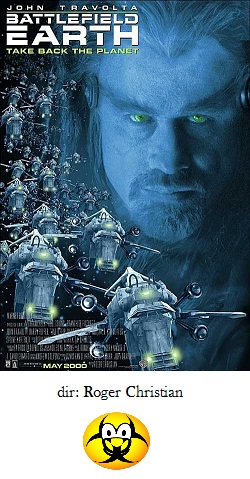 For how ever many more centuries that movies may exist, the stunningly inept Battlefield Earth will still be discussed and analyzed as one of Hollywood's singularly awful creations.

Based on the reknowned sci-fi novel by Scientology founder L. Ron Hubbard, Battlefield Earth tells of Earth in the year 3000, where for a thousand years the alien race of Psychlos have ruled over a rag-tag band of the few humans still left on the planet.  Why?  Because the Psychlos want gold.  Barry Pepper stars as our human hero who is captured by our main Psychlo villain, John Travolta as 'Chief Security Officer Terl.'

Travolta decides that, in order to gain as much gold for himself, he'll stick Pepper in a 'learning machine' and zap info into his brain.  After a few zappings, Pepper is able to speak the Psychlo language and can fly their ships.  While Travolta makes plans to steal all of the gold from Ft. Knox (amazing how after a 1000 years of rule, the Psychlos never stumbled upon this building filled with gold bars just sitting there), Pepper trains other humans and executes a plan to destroy the invaders and win freedom. Which, naturally, they do.

This plot synopsis makes the movie sound like it could be a fun, silly, romp.  Maybe it could've, but some things would had to have changed.  Namely, everything.  First, the Psychlos themselves aren't very bright.  Not only do they miss Ft. Knox, but they always seem astonished that 'man-animals' can, well, do anything; "Operate machinery?" one Psychlo scoffs.  What exactly was going on on Earth when the aliens took over, I wonder?  Travolta even wants to experiment with a human to find out what he eats.  Wouldn't the Psychlos had to have studied humans a bit before figuring out how to take over the planet?  And gold is the most precious commodity in the entire universe?  Why Travolta would want to keep pumping Pepper full of knowledge just to be able to mine gold is another mystery.   After all, all this does is give Pepper inside information to be able to teach the other humans how to fly spaceships and arm nuclear warheads (which also have gone completely undetected) and save humanity.

The goofy screenplay makes the takeover of Earth sound more like a corporate merger, what with Travolta's threats to take information "straight to the home office."  Other ridiculous dialogue would include Travolta constantly calling Pepper "rat brain," or an awkward scene at a Psychlo bar with Travolta, and second-in-command Forest Whitaker, discussing the sexual prowess of Psychlo babe Kelly Preston who has a really long tongue.  Travolta's performance can best be described as an extra-terrestrial version of Mr. Burns from "The Simpsons" with the constant evil giggling while drumming his clawed, uncleaned fingers together.

The makeup and costuming are also huge misfires.  The humans are dressed in skins and rags like extras from Quest For Fire and the Psychlos are just grimy, with dirty nails, rotting teeth, ratty hair and breathing tubes that hang from their nostrils like ropes of mucus.  They've managed to conquer the entire planet Earth but they haven't mastered the art of using soap and water or dental floss.

Director Roger Christian reduces to rubble whatever possible entertainment value there may have been.  Over 95% of Battlefield Earth is shot in useless tilted angles that keep see-sawing back and forth even in the most mundane scenes, and when a tilt won't do, he lays on the slow-motion effects, usually both at the same time.  There are more pointless slow-motion moments here than in any 100 other movies combined; also every scene transition is comprised of an amateurish screen wipe that you'd see overused at a small-market television station.

If you combine a talentless director, a moronic screenplay, a group of miscast actors giving 'worst of career' performances, ugly visuals, and cheesy special effects, you too can make a film as memorably disastrous as Battlefield Earth.