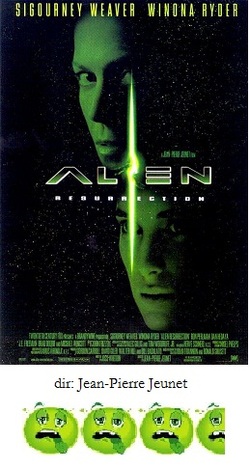 If Alien 3 was a sign that the saga of Ellen Ripley was on its last legs, then Alien:Resurrection is surely its final funeral oration. This fourth installment is a great looking, but lackluster, and totally confused sequel that also suffers from a severe case of inertia and preposterousness.

The whole shebang starts off on the wrong foot. Some 100 years after the end of Alien 3, a group of scientists on a super-spacestation use a sample of Ellen Ripley's blood to clone her back into existence, but what they really want is the alien that was gestating inside of her, which is also cloned along with her. Now, if memory serves me correctly, at the end of Alien 3 the prison planet was left in pretty rough shape, and much of it was wrecked, so I don't know how a fragile, glass testtube of her blood was left uncracked. But never mind. Or, the likelihood that blood which is 100 years-old would be pretty coagulated, rotted, and rendered useless. But never mind. Or that, even if the blood was saved and preserved earlier, why would it take 100 years to use? But never mind. Or that, even if Ellen were cloned from this blood, the alien inside wouldn't be cloned as well (their DNA would be separate). If blood from a pregnant woman is cloned, that clone wouldn't be pregnant as well. But never mind. You begin to see the problem. It's solely used as an excuse to come up with a Ripley who is sort of part human and part alien. She now has super-strength and reflexes, and seems to have extra-sensory capabilities.

Sigourney Weaver reprises her role as cinema's greatest heroine, and it's probably one of her strongest performances in the series. Sadly, this performance is stuck in this by-the-numbers sequel which tries to stretch the story, but fails to inject much originality or energy.

Anyway, the scientists take the cloned alien and make a whole slew of them. Of course, something goes awry, and the aliens escape, laying waste to a majority of the people on the space station; however, the film decides to focus on a small rag-tag group of space-smugglers (led by Ron Perlman and Michael Wincott), all of whom lack personality. Included in this group is Annalee Call (Winona Ryder), who has a big secret. Anyone who is familiar with the series will need about two seconds to figure it out. Ryder performance is okay, I guess, considering the underdeveloped character she is given.

The film would have succeeded better if there was just more. More characters, more carnage, more action. At one point, it's made clear that there are about 12 aliens running loose, but for some reason we ever see only 3. What a waste.

The director of Alien: Resurrection is Jean-Pierre Jeunet, one of the talented and inventive French guys behind the fabulous Delicatessen and The City of Lost Children, and who, working alone, scored critical success with Amelie and A Very Long Engagement. To his credit, the film looks really good, but I'm afraid they didn't let him go nearly far enough. The amazing visual sense of his other films could have really sent this movie into surreal hyperdrive, but as it is, it's neat-looking but not much else.

One big twist involves a sort-of sexual seduction of Ripley by an alien (I think that's what happened, the photography is very muddy and the editing greatly confuses the scene). The resulting offspring is a giant Human/Alien hybrid creature that begins to run amok. What just happened? I don't know. One still-cocooned scientist at the nest (Brad Dourif) prattles off some strange, confused monologue about "Man and Alien as one" or something to that effect. I had no idea what the hell that meant. I've even asked people who actually thought this movie was great, about what exactly he was talking about and what the hell it meant, and even they couldn't tell me. Hmmmmmm.

If your going to throw some new stuff into the story at least make it comprehensible. As a mindless piece of eye-candy, Alien: Resurrection is acceptable, I guess. But if you are looking for something that is action-packed, suspense-filled, or that actually makes sense. You might want to give this flick a solid pass.